The partnership makes Gang Beasts the second major gaming IP for Toikido, following global success for the Among Us property. 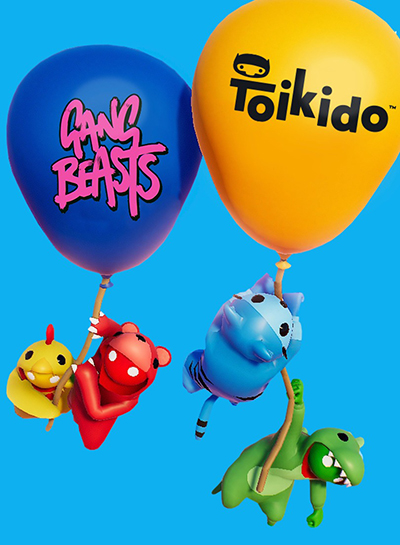 Following ongoing success with the Among Us brand, Toikido has landed a deal with another gaming super studio. The company has signed a global master partnership with Boneloaf and the multi-award-winning Gang Beasts.

Darran Garnham, founder of Toikido said: “We are huge fans of the Boneloaf team and have been playing Gang Beasts together and with our families for ages, so to bring it into the Toikido stable is amazing news”.

Boneloaf is working on a series of experimental multiplayer party games with the development team working iteratively, prototyping and play-testing to identify what is fun. The team grew up playing Mario Kart 64, GoldenEye 007 and other local multiplayer games, and so have been inspired to make games that have a similarly lively and fun feel to them.

Gang Beasts, which has recently been announced for release on Nintendo Switch, has developed an amazing fanbase. Honours bestowed on the title include: Honourable Mention for Excellence in Design the Friendly Fire (Best Game to Mess With Your Friends) from Curse at E3, Gamer’s Voice Award in the Multiplayer category at SXSW, Better with Friends Steam Award, a BAFTA Nomination in the Multiplayer category in 2018 and the Best Video Game category at the Sheffield Digital Awards in 2019.

Toikido has slated the launch of Gang Beasts consumer products for 2022 across a number of categories, including, but not limited to toys, apparel, stationery and more.

Darran is delighted with the Toikido business so far, as the company continues to build on its early success stories. “Toikido is a business that ‘pushes the envelope of innovation’, not only in the kind of toys and IP it delivers to a contemporary toy industry, but in the way the industry itself operates,” he said. “We have the infrastructure to operate at lightning speed, having brought Among Us to market in under six months from agreeing terms to hitting the shelves. This is revolutionary to the normal route to market.”

“Toikido has been born by handpicking amazing people who I have always wanted to bring together,” Darran added. “We’ve developed an ecosystem across many disciplines and skills that are really going to shake things up a bit. I’m really very excited about the future of the business.”