The brand new Toomies Batman range has been created in partnership with Warner Bros and launches with two signature vehicles. 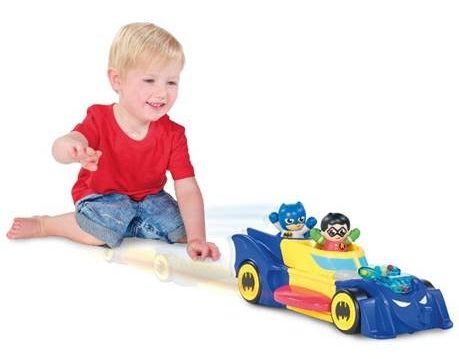 In line with the release of the much-anticipated Batman film this March, Toomies has announced the launch of a new range of toys to bring Gotham City closer to home. The range offers a perfect opportunity for fans of the Batman franchise to introduce their little ones to the world of Batman through the collection of new Toomies vehicles.

In partnership with Warner Bros, the new range of character figures and vehicles brings the action and drama of the Batman franchise to life, giving pre-schoolers the power to make up their own stories with the crimefighting superhero characters.

Toomies’ Batman range has launched with two signature vehicles from the World of Batman with the Batmobile and Batcycle. The range offers multiple ways to play, with vehicles that transform and reveal new vehicles. They can attach to each other in tandem to create further play possibilities, alongside the uniquely designed retro Batman and Robin easy-grip character figures. The vehicles have a rev & go feature, allowing them to speed to the rescue and save the day -perfect for role play and storytelling.

The classic Batcycle and Robin sidecar gives Batman and Robin their own personal vehicles which connect to each other and can also interlock to make the 2-in-1 Batcycle. The Batcycle’s flywheel-driven mechanics means the dynamic duo can rev and go, and kids can easily split and connect using the simple hook design.

This vehicle gives kids the freedom to choose exactly how they want to play and includes Batman and Robin figures. With a host of features to keep little ones entertained, the flywheel-driven mechanism means kids can rev and go. A popping effect engine up front has colourful balls that pop as the Batmobile rides along. This deluxe Batmobile can also transform into the mini Batmobile and reveal a Robin jet with extendable wings