The company has added Fireman Sam, Despicable Me: The Junior Novel and an Easter Bunny Creative-Tonie to its range. 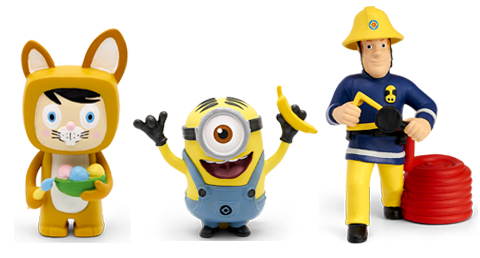 Children’s audio system Tonies has added two new characters to its collection of stories and songs, as well an Easter Bunny Creative-Tonie. Fireman Sam and Despicable Me: The Junior Novel join other popular tales such as The Lion King, The Gruffalo and Little Red Riding Hood in becoming Tonies – which offer a screenless, interactive storytelling experience.

Based on the BBC children’s TV series, the Fireman Sam Tonie runs for 60 minutes and tells the tale of its namesake saving the day in the fictional Welsh town of Pontypandy. Despicable Me: The Junior Novel Tonie runs for 116 minutes and regales the story of evil mastermind Gru and his minions, one of which the Tonie itself takes the form of.

The Easter Bunny Creative-Tonie takes the form of a bunny holding a basket of Easter eggs and will enable users to record their own audio via the Tonie-App.

Tonies co-founder Marcus Stahl said: “We are delighted to introduce two such well known and loved titles to our collection. Minions have become iconic animated figures in their own right, and it is fantastic to be able to add the timeless character Fireman Sam to the collection. We look forward to seeing the response from new and existing customers and have more exciting launches planned in the coming months.”

Launched in the UK in 2018 by Patric Faßbender and Marcus Stahl, the Toniebox is an intuitive speaker system that is revolutionising story time for children with no screens or complicated controls. It is an easy, fun and interactive way for 3-8 year olds to play their favourite stories and songs – by simply placing a Tonie figure on top of the box to make the content from the audio play.

Over 10.5m Tonies and 1,000,000 Tonieboxes have been sold across Europe since launch and 2020 began with the announcement of the brands’ expansion to the US –expected towards the end of this year.

Despicable Me: The Junior Novel, Fireman Sam Tonies and the Easter Bunny Creative-Tonie are available now. Visit  the website for more details.