The shop, based in Hildenborough, is set to close after almost four decades of business. 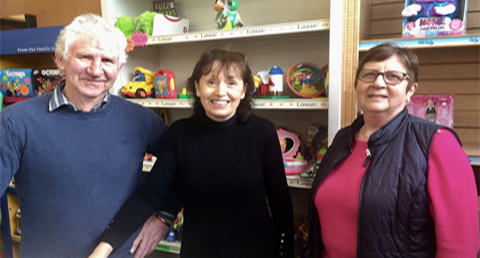 Toy Time, housed in a barn at Meopham Bank Farm, has been in business for 37 years. Dennis and Brenda Hill are entering their 90s and have decided it’s time to close the doors.

The large 2,500 square feet store has been run by farm manager Brian Ingleson and his wife Eve, along with their daughter Karen Greenwood.

“We’ve seen so many generations, parents who have come here as children, even grandparents,” said Eve, who has lived at the farm for 52 years. “We’ve had customers who have been loyal to us all that time. They have been coming in with tears in their eyes, it’s been overwhelming, very emotional. It’s been unbelievable the amount of comments we’ve received, people are genuinely upset that we’re closing.”

Dennis started the store as a hobby first opening a small shop in what was once the Granary. Their success – and loyal following – has been boosted by the fact that Brian has also taught more than 200 boys and girls to ride their bicycles and adapted bicycles for disabled children, which only adds to the huge impact that Toy Time has had on the community over the years.