ToyAid thanks the toy industry as over £140,000 is raised

Thanks to ToyAid and the support it received over recent months, more than £140,000 will go to charities addressing extreme poverty. 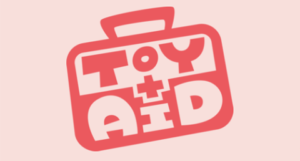 ToyAid, the self-help organisation, so termed because it gained awareness for the toy industry across national radio while helping those less fortunate, wishes to thank the toy and entertainment industry for its support. That support has provided massive help to small charities that missed out on donations during the pandemic, and those families and children that relied on them for food, basic essentials and mental health support.

ToyAid, founded by KidsKnowBest’s Joel Silverman and Wow! Stuff’s Richard North, garnered toy and entertainment companies from all corners of the British Isles and all categories in the industry, supported by The Light Fund which volunteered to collect all monies on its behalf. Richard commented, “With over £140,000 raised in just six weeks, the industry can be duly proud of the part it played at the peak of the pandemic when so many of your own businesses were suffering too.”

Joel Silverman added: “Global Media’s Make Some Noise’ charity was chosen by ToyAid because of its targeted approach to families and children. Global has now started releasing the funding from their own Emergency Appeal that began back in June and has so far raised £1.7m. Thanks to initiatives like ToyAid, that number is still rising.”

More than £140,000 will go to charities addressing extreme poverty. This funding will reach those in crisis, including the homeless and families who are already facing or are at serious risk of financial hardship and in need of food, shelter, employment support and other essentials.

Joel and Richard conclude: “Thanks to the continued efforts from supporters like you, we look forward to furthering the hard work of these small charities and helping those hit hardest by coronavirus in our communities. Thank you.”