To date, Spin Master has donated almost 200,000 face shields made using headbands from the company’s Headbanz game to hospitals, nursing homes and shelters. Three of Spin Master’s manufacturing facilities in Mexico have been working around the clock to produce the face shields, which are now in use at locations including Toronto, New York, California and Mexico.

The company has committed to manufacturing the face shields for as long as they are needed and is currently producing more than 20,000 a day. An internal team at Spin Master is coordinating requests from outside organizations and arranging for deliveries daily.

“One of the most powerful tools we have in this fight is our imagination, and it’s amazing what the people at Spin Master have done with theirs. They’re making a difference everywhere,” commented Dr. Ruth Heisey, whose staff has been some of the recipients of the PPE. The company replied to a picture posted of staff wearing the face shields with the comment: “Thank you to all the superheroes on the front lines!”

Harrods has unveiled a service whereby a team will carry out personal shopping for some of the store’s most valued customers. Staff will take orders from clients via telephone and smartphone messaging as part of the first stage of a phased reopening of the department store. The ‘remote clienteling’ service is set to begin on May 18th and is designed to replicate the ‘one-on-one relationships that retail colleagues have with customers’. Only a small number of the retailer’s 5,000 staff will be needed to carry out the service while adhering to social distancing, but Harrods will monitor the operation to test whether it could extend the service going forward.

“We are exploring technology to scale as required ahead of being able to phase to inviting customers back in store,” said a spokesman.

The next phase is likely to see customers allowed to return to those departments of the store where it is easiest to practise social distancing. The spokesman added: “Timings for this will naturally be dictated by government guidance. We are taking this opportunity to explore, to test and to learn how we as a business adapt to changing circumstances. Every decision we make will be guided by our commitment to safety.”

Employees at Sports Direct and House of Fraser have claimed that store managers have been asked to work at least once a week while under the government’s furlough scheme. Staff told the Guardian they had been asked to volunteer to go into stores about one day a week since the entire store team were put on furlough last month.

Managers have reported being told not to clock on when working in stores, where they were asked to pack up store stock to be returned to the group’s warehouse and sold online. Asking employees to work while on furlough is breaking the terms of the government scheme, as Andrew Crudge, an employment law expert explained: “The guidance is quite clear. If people are being asked to work and that will create any revenue for the company, that would be a breach of the provisions.”

Staff were asked to return to work full time on Monday this week, on 90% pay, but many did not believe they would be provided with sufficient protective kit or social distancing measures. After the Guardian published details of the plan, the company changed its decision.

JK Rowling has announced that she is donating £1m to charities to help people in need during the health crisis. Half of the money will go to Crisis, which helps homeless people, and the other half will go to Refuge, which helps victims of domestic violence.

JK Rowling’s donation comes as a warning has been issued that many charities are struggling to maintain the support they offer. The issues they support have not gone away during the pandemic, indeed many additional needs have been created. Charity shops are among those that have been forced to close, while fundraising events have been cancelled or postponed; the cancellation of the London Marathon alone will translate to a huge shortfall in donations and consequently funds. Despite some government help, resources are dwindling fast. Although attention is naturally focused on helping NHS charities at this time, there is a very real danger that this may be to the detriment of other worthwhile organisations and the public is being urged to remember them too.

In Portugal, Science4you staff have now returned to the company’s head office, with social distancing and safety measures in place. Employees were presented with a “Re-Starter Kit” on their desks, inspired by the company’s science kit range but with tailored contents, to help them face the practicalities of a new way of working. The company said it is looking forward to getting back to business and using its ability to innovate to adapt both its working practices and products to the new way of life. 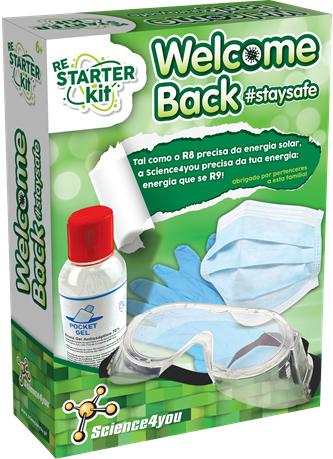