Hornby: A Model World series one was the second highest series launch on Yesterday ever, and will be followed by series two in 2023.

UKTV has commissioned a second series of Hornby: A Model World for its leading factual channel, Yesterday. Produced by Rare TV, the new series will once again go behind the scenes at Hornby HQ in Margate, home to the iconic Hornby, Airfix, Scalextric and Corgi brands.

Narrated by Sunetra Sarker, the series observes the ups and downs of the design process as the teams at Hornby strive to ensure all-important details are spot on, whether perfecting the sound of a 1930s steam loco or recreating the stitching on a First World War fighter plane. The first series featured layouts created by actor Eddie Izzard and music producer Pete Waterman.

Series one launched to a consolidated 630k, making it the second highest series launch on Yesterday ever. The season went on to average a consolidated 390k across its ten episodes, with total consumption pushing this to 756k.

Emma Barker, executive producer of Rare TV, said: “We are delighted that Hornby has invited us back inside its fascinating HQ to follow more of the team’s amazing work, and we’re keen to showcase more of Britain’s finest model layout builders, all creating miniature masterpieces in lofts and sheds.” 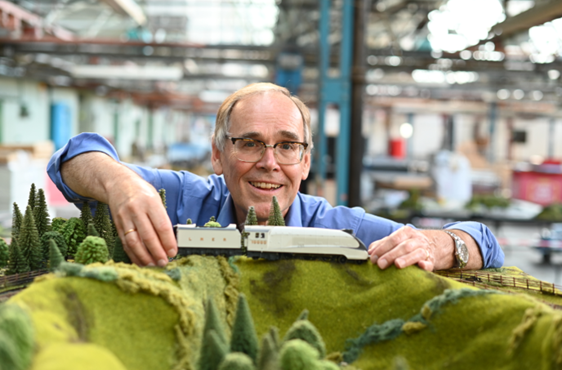 Simon Kohler, Marketing & Development director at Hornby Hobbies, commented: “For many, a hobby is a wonderful form of relaxation – whether it’s creating a fully detailed model railway, racing a Scalextric Formula One or meticulously piecing together a fully detailed Airfix kit. Whatever the case and whatever the pastime, such hobbies can be filled with essential mental wellbeing, fused with an incredible sense of achievement and satisfaction.”

Hornby: A Model World is filming now and is set to air on Yesterday in 2023. The series will also be available to catch-up via UKTV Play. The first series is available on demand on UKTV Play now.