Q4 Christmas Media activity includes heavyweight TV, radio and online for Subbuteo plus campaigns for a selection of the company’s bestselling family games. 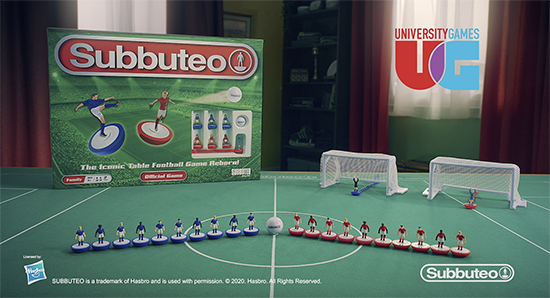 The heavyweight media schedule for Subbuteo kicked-off in September, with core timing running across mid-October through to December. It will include TV advertising within family, sport and adult time with the inspiring and nostalgic family-led creative Subbuteo TV commercial, featuring the voice of the sporting broadcasting legend John Motson. The TV exposure will headline supporting activity that includes radio partnerships, YouTube and social media plans as well as digital activity with Sky Sports Premier League videos and highlights both in app and online.

In addition to the Subbuteo campaign, there will be comprehensive TV, online and social coverage for the ever-popular Smart Ass, as well as digital and social campaigns for bestsellers Kersplatt! and Dumb Criminals, and newcomers for 2021, Judge Your Friends and 5 Star Review, which will all benefit from significant digital marketing campaigns in the run-up to Christmas.

Gemma Lewington, marketing director at University Games and The Lagoon Group, said she is is excited to get these powerful marketing campaigns underway and eager to see the impact that they create: “Subbuteo is an iconic game that was a bestseller last Christmas. With the new Official England Lionesses Main Game – the first all female Subbuteo team – now available, this family favourite is certain to be featuring on Christmas lists this year.”

“Smart Ass, Kersplatt! and Dumb Criminals are also high performing and brilliantly entertaining family board games and the two new games, 5 Star Review and Judge Your Friends are on trend and perfect for a hilarious night in with family or friends,” added Gemma. “With these new and exciting lines supported by extensive campaigns running on TV and across social and digital media channels, University Games is set to create a bang for Q4.”

University Games and The Lagoon Group offers a comprehensive portfolio which includes the ever-popular lines Subbuteo, Smart Ass, Sort It Out, Stupid Deaths, Kersplatt, Lagoon Table Tops, What’s Up and Don’t Say It, as well as Football Stadiums, Harry Potter and Game of Thrones 3D puzzles.