VR Distribution’s Kids Against Maturity holds the No.1 spot in Toys & Games, while Beat That! The Bonkers Battle of Wacky Challenges is No.3. 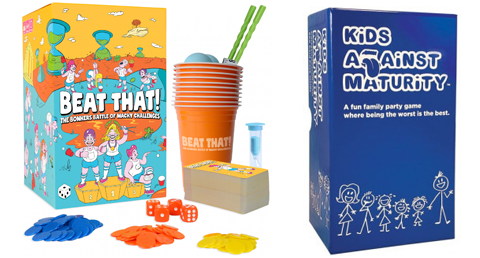 After 18 months of significant growth in the party games category, VR Distribution is seeing another jump in games sales in Q4, with two of its games in the top three of Amazon’s Toys and Games category.

Kids Against Maturity is sitting at the No.1 selling spot, while Beat That! The Bonkers Battle of Wacky Challenges is at No.3.

Launched initially in the US, Kids Against Maturity was a number one seller in the Toy and Games category on Amazon.com in the lead up to Christmas 2020, and the game is currently the third best-selling game overall on Amazon in the US. VR Distribution launched it in the UK in September.

With age-appropriate toilet humour for kids and innuendos for the adults, Kids Against Maturity can be enjoyed by all ages, and is best played by four or more people. The game comes with 500 question and answer cards and a handy box for storage, all adding up to a portable game that’s perfect for families to take wherever they go. Kids Against Maturity uses the tried and tested fill-in-the- blank game-play and is simple, yet very funny, to play.

Sales of Beat That! were helped by Philip Schofield’s show picking it as a key game last Christmas. The addictive, dexterity-based challenge game is quick to learn and provides hours of entertainment for kids and adults of all ages. Players win points by betting on their ability to successfully complete a series of funny, tricky and outrageous challenges using an assortment of random objects.

Stewart Middleton at VR Distribution said: “It’s great to see two of our games in the top three selling toys and games on Amazon. While we have seen our party games in terms of Cards Against Humanity in the top selling lines before, with Beat That! and Kids Against Maturity it is the first time we have seen family/kids’ games sell at these high levels.

He added: “It’s really encouraging that the high levels of game play, value and, ultimately, huge amount of fun games for all age games are resonating so well with consumers”.