The Vue cinema chain hopes to reopen in mid-July, although plans are still being finalised to enable the chain to operate a safe environment at its venues. In a BBC interview, chief executive Tim Richards said, “We are trying to work with the government to demonstrate we are not like sporting fixtures and pop concerts. We can control how many people come into our cinemas at any one time – we have the ability to control the exit and entrance.” Vue claims that research has shown that film-going is one of the main activities people wanted to do after the lockdown is lifted. The chain hopes to be open in time for the launch of director Christopher Nolan’s action movie Tenet on 17 July.

Hong Kong’s government has announced an increased relaxation of restrictions on public gatherings and will soon allow gyms, cinemas and beauty parlours to re-open. At present, gatherings of only four people are allowed; this will increase to eight people from May 8th  and some students will return to school at the end of the month. However, bath houses, karaoke bars and night clubs will stay closed. Some bars will reopen with capacity restrictions, but live music and dancing will not be permitted. Reusable masks will be sent to residents who register online, and 10 single-use masks will be mailed to each household by the end of June. The more relaxed crowd restrictions are designed to give some relief to businesses that have been forced to close up to now, however limiting gatherings to eight will prevent the resumption of large-scale anti-government protests.

“Experts are of the view it’s time to relax some of the measures to some extent,” Hong Kong leader Carrie Lam told reporters. “But I must stress that the epidemic may flip flop in a way, and we must remain vigilant continuously.”

London’s temporary NHS Nightingale hospital, on the site of the Excel centre, is being put “on standby”, with no new coronavirus patients expected. A government spokesperson said: “Thanks to the determination and sacrifice of Londoners in following the expert advice to stay home and save lives, we have not had to expand the Nightingale’s capacity beyond the first ward. That’s obviously a very positive thing, and we remain grateful to everybody in London for following the government’s advice in helping to protect the NHS. What the Nightingale will be is effectively placed on standby, so it would be ready to receive patients should that be required, but we are not anticipating that will be the case.”

Tim Bray, an engineer and vice-president at Amazon, has announced his resignation over the company’s firing of employee activists who criticized working conditions amid the coronavirus pandemic. Amazon is facing increased scrutiny and employee activism over its internal response to coronavirus, and Tim Bray is the highest-ranking corporate employee at Amazon to publicly speak out about worker conditions. He commented: “Remaining an Amazon VP would have meant, in effect, signing off on actions I despised. At the end of the day, the big problem isn’t the specifics of Covid-19 response. It’s that Amazon treats the humans in the warehouses as fungible units of pick-and-pack potential.”  (Fungible = interchangeable. We had to check too.)

Asmodee has announced that an official Dobble Instagram filter has now gone live. As the company finds more ways to enable players to enjoy its games while confined to their homes, the filter displays a pair of virtual Dobble cards, with matching symbols to find. Players are invited to see how quickly they can spot the pairs and challenge their friends to beat them at the game.

Jarrold department store in Norwich has re-opened online, as the company put its website back into full e-commerce mode. With plans in place to make the working environment safe for its team of staff, the company says it is “ready to roll” and offered its first customers a 10% discount code to kick start online sales. The store’s toy department offers a wide range of products for all ages, including games and puzzles that are ideal for spending time with the family. A message on the company website reads: “We know how hard you are working to stay safe at home, so we have opened our website to help you get the items you might be missing delivered to your door, or to send as a gift to someone you want to share the love with. After all, champions need a little cheering on from time to time.”

Although the shop is closed to customers, Armadillo Toys in Chapel Allerton, Leeds has decorated its windows with bright rainbow designs to cheer up passers-by, and messages of thanks for the NHS. Owner Lisa Clay said: “Rainbowed up both windows now. Is that a word? If not, it should be!” The toyshop is taking orders over the phone each weekday morning for same day local delivery or collection and is also posting out orders. 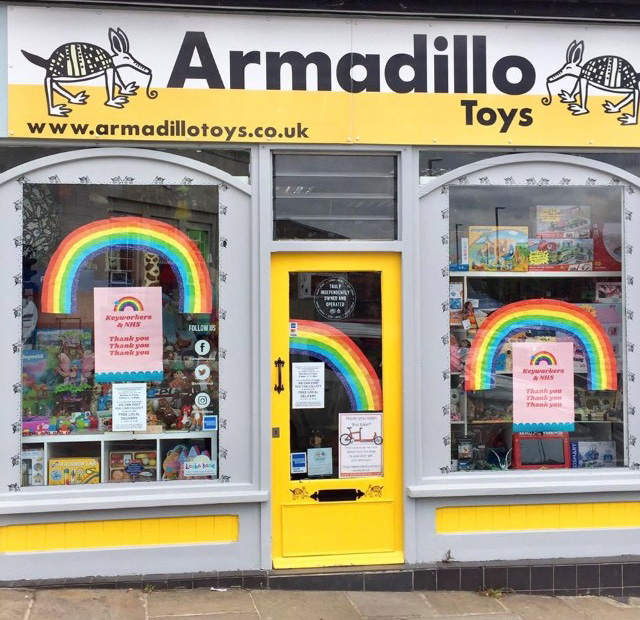