The online gift specialist says it will request that Amazon stops using ‘Wicked Uncle Toys’ to drive click-throughs to its site – and that it isn’t the only retailer affected. 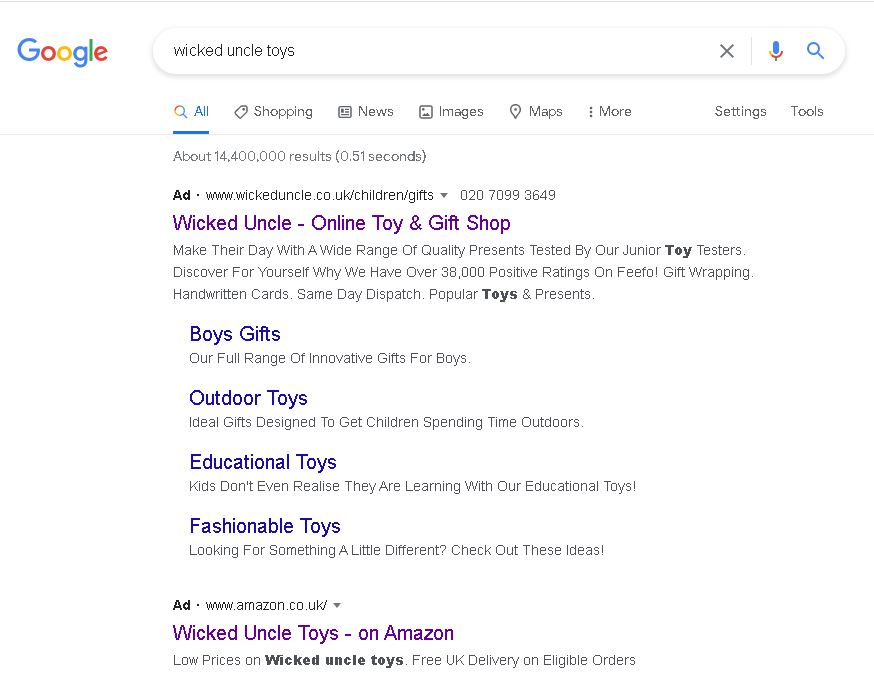 A screenshot of Google’s search results shows an Amazon ad for ‘Wicked Uncle Toys’ directly below Wicked Uncle’s legitimate ad to its own site.

Mike O’Shea, founder of Wicked Uncle, told Toy World: “We had a lot of hassle in May from Amazon bidding on ‘Wicked Uncle’ for PPC [Pay-Per-Clicks, an internet advertising model used to drive traffic to websites, in which an advertiser pays a publisher when the ad is clicked]. We complained to Google, explaining that Amazon was using our trademark, and they stopped it. However, now they are using ‘Wicked Uncle’ to improve their organic results in what I would call an unfair way”.

Mike pointed out that searching for ‘Wicked Uncle’ or ‘Wicked Uncle Toys’ on Google brings up ads for Amazon, complete with the words “Low Prices on Wicked uncle toys,” as well as ads paid for by Wicked Uncle itself. When clicked, the Amazon ad takes users to a landing page of toys and games, some of which are Wicked Uncle best-sellers.

“I have written to our lawyers,” adds Mike. “It’s early days yet, so we will send Amazon a nice letter to ask it to stop. Then we will send a Cease and Desist letter, and go from there. It strikes me as the essence of unfair competition: using market power to steal clicks from your competitors, not because you are better but because you can. I am honoured to be noticed, even if only by their bots…but it is not good for anyone.”

Wicked Uncle doesn’t seem to be the only retailer caught up in this tactic. Google searches for ‘Smyths Toys’ and ‘The Entertainer toys’ also bring up Amazon ads within the first page of results.

This is the second consecutive day Toy World has reported on the questionable practices of Amazon. Yesterday, we highlighted an ITV News investigation that showed that the online retail giant is destroying millions of items of unsold stock each year, the majority of it new, unused, and perfectly serviceable. Undercover filming carried out at the retailer’s Dunfermline fulfilment centre, one of 24 that operate across the UK, showed smart TVs, laptops, drones, hairdryers, headphones, computer drives, books and thousands of sealed face masks sorted into boxes marked for destruction.