Wotch Creations is launching its first licensed collectible product this October in partnership with SmileyWorld. 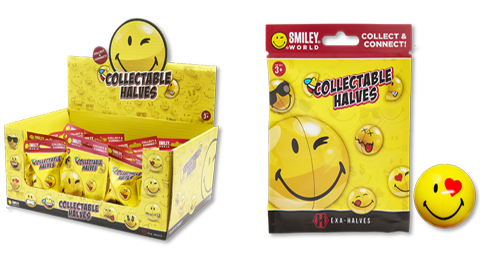 Walsall-based family business Wotch Creations is delivering its first licensed product to the toy industry this October, after signing a licensing partnership with SmileyWorld that will see the release of new collectible fidget toy range, Smiley-Halves.

Digital native brand SmileyWorld was established in 1997 when CEO Nicolas Loufrani created a new universal language, the Smiley Dictionary. SmileyWorld transformed ascii emoticons into something understandable to all and influenced the emoji language still used daily.

The first product from Wotch’s international patent pending Hexa-Plex technology range, Smiley-Halves lets consumers ‘Collect & Connect’ Smiley’s iconic emoticons. The initial launch range comprises 10 blind-bagged emoticons in 22 variations, including six coloured editions of varying rarity and limited-edition Legendary glow in the dark versions that add to the collectability of the range. Not just a collectible toy, Smiley-Halves will allow kids to communicate how they are feeling in a unique way. Each magnetic half can also be mixed and matched with any other to create totally new expression. Each complete Smiley-Halves fits in one hand and the movement from the Hexa-Plex technology provides a distinctive and satisfying click when turned, perfect for keeping hands busy.

Smiley-Halves will be supported throughout September with YouTube and TikTok marketing campaigns featuring a series of animation and unboxing videos which will demonstrate the Collect and Connect experience central to the play pattern. These campaigns will run alongside influencer partnerships to strengthen and complement the messaging. October will see the launch of a TV advertising campaign with Viacom, covering Nickelodeon, Nick Jr. and Nick Jr. Too, supported by activity on Nickelodeon’s social channels. The TV campaign will give retail partners already stocking the product the opportunity to feature in the adverts. Links and listings will also be added under stockists on the Hexa-Plex website, as well as referenced in social media campaigns.

Phase 1 of the Smiley-Halves blind-bag collectible range is available in eye-catching CDUs of 20 pieces, each with an RRP of £4.99. FSDUs will follow for subsequent launches of new phases, along with collection boxes and display stands holding 10 faces. Product is available for dispatch into stores from the end of September, for a 1st October launch.

All order enquiries should be directed to info@wotchcreations.com. Alternatively, retailers can call Wotch Creations’ sales team on 0330 133 4392. Visit www.wotchcreations.com for more information.