The master toy deal will see Wow! Stuff creating a range of toys based on the pre-school animation, including plush, dolls and play sets. 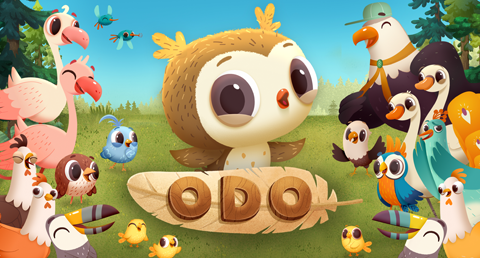 Wow! Stuff has been announced as the first licensee for ‘boundary breaking’ 2.5D animated series Odo. Created by Sixteen South Originals and co-produced with Letko, the series, which follows a little owl with big ideas, has now sold into more than 128 countries. In the new master toy global deal, Wow! Stuff will create a comprehensive range of toys including plush, dolls, figures and accessories, role-play toys, play sets, track sets, construction toys and bath toys.

The first series of Odo comprises of 52 x seven–minute stories and has already been pre-sold to many leading networks and broadcasters worldwide, It is airing every weekday on Milkshake! in the UK and has also been signed by HBO Max in the US. The series can also be found on MiniMini+ in Poland, TVO Kids and Knowledge Kids in Canada and ABC in Australia, with many more territories to roll out throughout 2022.

The series combines humour and heart and aims to teach young children self-efficacy and to believe in themselves, in order to help combat the troubling rise in childhood anxiety and depression levels. Each episode sees Odo positively tackle challenges with the help of his best friend Doodle, under the loving and watchful eye of Camp Leader, an eagle.

Wow! Stuff’s director of licensing, Kenny McAndrew said: “We were pitching against some of the biggest toy companies for Odo. Everything Odo stands for resonates and aligns with our own values, we wanted this with all our hearts – and I think that showed through in our pitch. Odo is unique; Odo the owl has gender neutral appeal, the themes are ground-breaking and the series is grounded on social justice. And it’s very, very funny.”