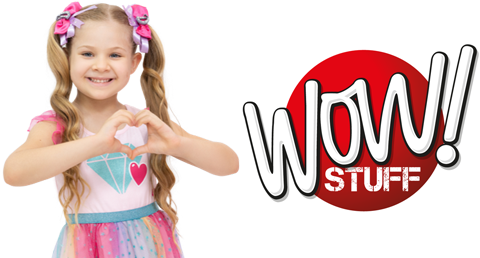 With over 4.4b monthly views on YouTube and over 180m active subscribers, Love, Diana licensed merchandise is already selling fast at retail. In keeping with its guiding mantra of ‘Great Brands Brought to Life’, Wow! Stuff will be adding its own Wow factor to key items used by Diana in her series, for fans of the hit show to enjoy at home.

Kenny McAndrew, director of Product Development at Wow! Stuff explained: “Kids Diana Show and the Love, Diana brand perfectly complement our leading tier 1 pre-school brands. We’ve added our Wow point of difference to Diana’s favourite key props, utilising our product development team which has scientists and engineers at its core, all of whom love creating that magical Wow factor in toys.”

Wow! Stuff will be embedding its Magic-Light Technology into the Love, Diana brand’s flagship item, the Magical Wand Hairbrush, as used by Diana in the series to transform into her animated persona, the Princess of Play.

This will allow children to re-enact what they see Diana doing during her magical on-screen adventures. Other flagship props have been developed into products by Wow! Stuff’s tech team, including the Light Up Hair Bows featured on every Love, Diana Adventures episode, plus Diana’s Secret Password Journal, a voice activated electronic journal with its own secret compartment.

Danny Spronz, managing director EMEA, pocket.watch, who co-led the deal alongside Stone Newman, chief revenue officer, was delighted with the signing and said: “Wow! Stuff never ceases to amaze the industry with its ability to create wholly bespoke products that deliver a real ‘Wow!’ to kids. The team’s innovation and ability to engineer really fantastic products, on brand and in universe, aligns with our aim to ensure Love, Diana brand merchandise stands out from a crowded market sector”.

Wow! Stuff’s flagship Love, Diana products will launch in summer, and product information will be available at www.wowstuff.com soon.