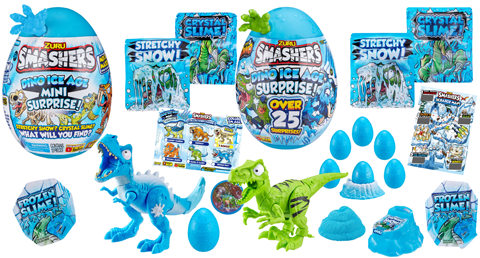 Following the successful launch of its Smashers Dino Epic Egg in 2019, Zuru has unveiled the latest wave of super-sized surprise dinosaur eggs.

Offering an engaging unboxing and construction experience, children can slime, fizz and smash their way through the eggs to reveal the Smash-O-Saur Dino parts, which are hidden within different compounds – stretchy snow, frozen slime, crystal slime, growing snow and blizzard bombs – which children will need to excavate. Once all the dino parts have been collected, the Smash-O-Saur can be constructed. With three to collect, each Dino Ice Age Surprise Egg also includes six Smash Egg Smashballs, an arctic scratch-map and the Smash Egg rebuilder.

Smashers has been cited as one of the fastest growing toy brands in the UK since its inception three years ago and has increased globally by 476% since the first launch in 2017.

“We’re constantly looking at ways in which to evolve and grow our products, and this is perfectly demonstrated with Smashers,” explains Zuru’s creative director, Adam Woods. “The Epic Egg in particular, pushes the boundaries of unboxing to deliver an extended play experience. There are 25 layers of surprises and unique unboxing reveals which finally result in finding one of three characters. These characters differ from those found in our first wave of Epic Dino Eggs in that they are fully articulated and ready for battle. It’s a concept that is working phenomenally well for the business; everything from the iconic packaging, wacky characters, numerous surprises and great value, as well as meeting current compound and slime trends, combine to drive the success of the Smashers brand.”

Additional SKUs have been added to further expand the range and include the Smashers Dino Ice Age eight pack and Dino Ice-Rex Playset. Smashers will be supported by a robust marketing campaign including TV advertising, PR, social and digital activations.