Following the launch, a mass social campaign will start next week ahead of the TV schedule which kicks off in August. 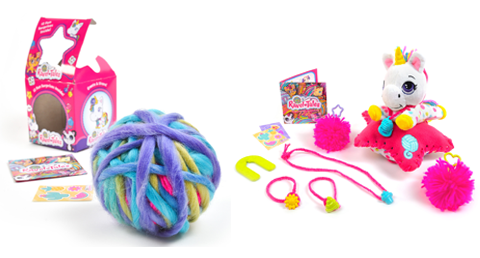 Character Options has announced launch details of new girl’s property Ravel Tales which arrives this week after a successful US launch in May.

Collectability and creativity combine as kids unravel their own plush pets with Ravel Tales. The aim is to find which pet is hiding in the ball of chunky Ravel Tales wool. Once unwrapped, it will reveal the surprise pet within, while the accessories and blanket pieces also create an easy sewing project. This new brand launched just weeks ago in the US and quickly took its place as a top new plush collectible, selling through in just eight days.

Since the US launch, the Ravel Tales YouTube channel has amassed 3.5m views to date, while influencers’ own channels have been flooded with #TheUnRavellers content. Character’s own marketing drive begins in July at launch and will echo the successes of the US campaign. FSDUs will create a “wow” Ravel Tales focal point in-store and influencers will be busy unravelling and creating their own YouTube videos. This will be a forerunner to all other activity which includes the entire cast of the Character Kidz event doing their bit on TikTok at the end of July, with the aim of achieving a million views in the time period.

This mass social campaign will start next week ahead of the TV schedule which kicks off in August, delivering heavyweight TVRs across satellite and terrestrial TV, while girls 5-9 pre-roll and a platform campaign with PopFun will run through August.

Mark Hunt, marketing manager at Character Options, commented: “We are extremely excited about Ravel Tales; our first major launch of the season. Stocks have rapidly sold out in the US, with a frenzy of reorders taking place which is encouraging for our market. Ravel Tales is a highly innovative toy that ticks so many boxes with the audience, and we expect it to be high demand from the moment it reaches stores.”