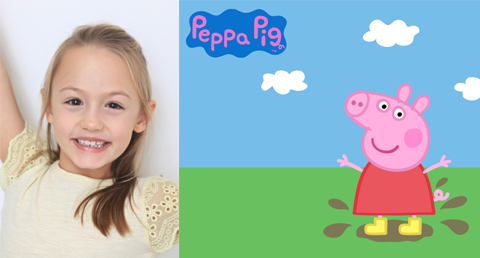 Entertainment One (eOne) and animation studio Astley Baker Davies (ABD) have underlined their commitment to producing fresh content with news that a new voice artist has been cast in the role of Peppa Pig in the popular pre-school animated TV series. 9-year old Amelie Bea Smith will make her debut as the title character in new episodes of Peppa Pig that are due to launch from February in the UK, US, Australia and international territories that air episodes in English.

Amelie will become the fourth British voice artist to take on the role in English-speaking territories following Harley Bird, now 18, who has been the voice of Peppa from the age of five and won a BAFTA award for the role in 2011. Previously, Lily Snowden-Fine and Cecily Bloom provided the voice for the character since the show first appeared on UK television screens in 2004.

“We’re delighted to welcome Amelie to the Peppa Pig voice cast and confident that she will continue the strong legacy of the previous Peppa voice actors,” said co-creators Neville Astley and Mark Baker from Astley Baker Davies. “Lily Snowden-Fine defined the role when she first voiced the character in series one at age five. Lily passed the baton to Cecily Bloom for series two before handing the reins to Harley Bird. As our longest standing Peppa, Harley’s award-winning contribution to the show over the past 13 years has been tremendous, making her a key part of the success of Peppa Pig.”