The popular multiplayer card game is now available on the Nintendo Switch platform, enabling online play alone or with others. 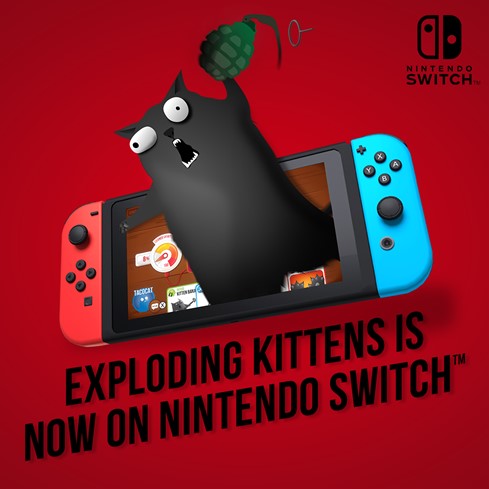 The most backed game in Kickstarter history, Exploding Kittens is a highly-strategic, kitty-powered version of Russian roulette, and is now available on Nintendo Switch.

With millions of games sold and downloaded, Exploding Kittens is a multiplayer card game where players draw cards until someone draws an Exploding Kitten and explodes. Players must play their cards carefully to avoid, move or defuse the Exploding Kitten, and the player who doesn’t explode, wins. The game is suitable for players of all ages.

The Nintendo Switch version allows participants to play with friends in the same room or online, or play with strangers in online play. There is also an option to play in single player mode against kitty-bot opponents!. This version of the game includes the Streaking Kittens, Party Pack and Betrayal Pack expansions, exclusive cards and hilarious illustrations by The Oatmeal.