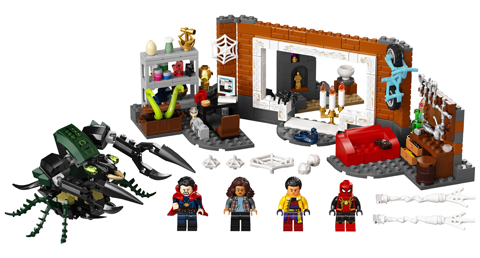 latest releases will delight superhero fans of all ages with a new range of Marvel sets and a DC Batman Batmobile Tumbler, a replica of the battle-ready vehicle.

Also new is the Lego Sanctuary II: Endgame Battle set featuring the four-winged Sanctuary II spaceship with its menacing array of six stud shooters. The spacious cockpit opens to reveal a pilot’s seat and instrument panel from where Thanos controls the ship, while below in the cargo room sits the Infinity Gauntlet. The set contains three minifigures: Iron Man, with blue power blasts and a shooter; Captain Marvel with fiery power blasts and a shield; and Thanos, with a golden helmet and double-bladed sword. Solid side rails make it easy for kids to grip and manoeuvre the large craft as they recreate scenes from Marvel Studios’ Avengers: Endgame.

With the Lego Marvel The Eternals In Arishem’s Shadow set, kids can join forces with four Eternals to defeat a Deviant bat. The Eternals have powers: Ajak is the only one able to communicate with the powerful extra-terrestrial beings, the Celestials; Sersi transforms matter into whatever she desires; Ikaris has superhuman strength; and Kingo can blast terrestrial energy. The set also includes a posable Celestial figure that can hold an Eternal minifigure in its hand and features the Ajak and Kingo minifigures.

On 1st November, Lego will also release the Lego DC Batman Batmobile Tumbler, a buildable 2,049-piece replica of the battle-ready superhero vehicle seen in Christopher Nolan’s films. The set features a cabin that can be opened, as well as two miniature figures of Batman and Joker. The car features an opening roof that gives access to the driver and passenger seats and control panel.