Week 9 of the coronavirus outbreak. The phrase ‘Breaking News’ has been replaced with ‘Oh, ****, what now?’ Chris ‘Failing’ Grayling has been appointed to chair a coronavirus intelligence committee – the only time you will ever see the words ‘Chris Grayling’ and ‘intelligence’ in the same sentence (unless preceded by the words ‘distinct lack of’). KFC has cancelled its ‘finger-lickin’ good’ ad campaign, judging it inappropriate in the current climate. A coronavirus conference has been called off due to…. you guessed it, coronavirus!

In the toy world, planned events continue to drop like flies: this week has seen the cancellation of the E3 video game show, the BTHA Parliamentary reception and an Entertainer stakeholder day at the re-opening of its flagship Bullring store. More will undoubtedly follow.

It also looks increasingly likely that the Euro Championships will be postponed to 2021, which would have been unthinkable a few short weeks ago. The Panini Euro 2020 collection could become a genuine collector’s item – the definitive record of the only tournament which never happened.

It’s not just one-off events which are being affected; so many traditional working and social activities are being curtailed. Mattel shut its UK office this week: no-one has been tested positive, it is purely a precautionary measure and apparently everyone is set up to work remotely – I wonder if others follow this approach, even though it goes against current official government advice? The Italian government has gone several steps further and ordered all shops to close for the next month unless they are selling essential items (pharmacies and food stores basically). Whether this measure is overly draconian or sensible will only become clear over the course of time. It will certainly skew the NPD market share data for the foreseeable future: it will be great news for those suppliers which have a strong presence in the grocers, not such good news for those who trade predominantly with the specialists.

Not wanting to be outdone on the reaction front, President Trump has banned people from the ‘Shengen States’ (i.e. most countries in the EU) from flying to the US for the next month, while appearing to blame the EU for the spread of the virus. To be fair, even Nigel Farage would be hard pushed to pin this one on the EU. Showing an unerring inability not to think things through, US citizens are exempt from the ban – presumably, they aren’t carrying coronavirus because…. he said so?! In reality of course, the only immunity here is Trump’s immunity to facts. Thankfully, cargo is not included in the ban, which is a relief of sorts. Hilariously it has been suggested that the UK is exempt from the ban because two of Trump’s golf resorts are situated here – you literally could not make this up.

Then there is the hokey-cokey currently taking place amongst the major Hollywood film studios. A quick recap for those who may have missed it: James Bond has moved its release date back from April to November; Universal’s Trolls World Tour nipped in and nicked James Bond’s slot, giving licensees and retailers an extra week’s Easter trading (hooray, as long as people are still visiting stores by then), at which point Peter Rabbit threw his carrots out of the basket, postponing the launch of his second movie outing to August, leaving licensees and retailers hopping mad (sorry, I couldn’t resist that).

So where does all this to’ing and fro’ing leave us? Essentially, in a kind of limbo none of us has previously experienced. Yet surely businesses must do its best to carry on and look past the short-term challenges to the medium and long-term? If the virus spread can be slowed over the next month, we can start to get back to a semblance of normality come the summer – by which time, there will be pent-up consumer demand and the Chinese factories will have been able to catch up. Maybe the Italian response is appropriate: perhaps it’s better to act decisively now rather than exacerbate the problem and give ourselves even more headaches further down the line? With such a huge percentage of toy sales taking place in the run-up to Christmas, the timing of this situation could arguably have been far worse. And if families are forced to self-isolate (and especially if schools are closed, as they have been in Ireland), they will need toys and games to keep the kids occupied. The Daily Mash recently ran a ‘satirical’ story about middle class families stocking up on board games due to coronavirus; it may yet turn out to be far closer to the truth than it had assumed.

I said this last week, but I do believe it is important to keep a sense of perspective, even though that is getting harder to do by the day; sensible, proportionate response is key. There will be people who hide behind coronavirus as an excuse – but not everything which goes wrong (or right) this year will be as a result of the pandemic. Of course, not all countries will contain this outbreak as well as China; it takes a particular kind of regime to successfully restrict the free movement of 930m people for any length of time – and a particular kind of people willing to comply with unprecedented measures (believe me, this is not a criticism in this instance). However, governments have the tricky task of finding appropriate middle ground; not damaging the economy versus not allowing the virus to spread unchecked is a difficult balance to achieve. Some of the measures proposed in this week’s budget – such as the Business Rates retail discount and Business Interruption Loan Scheme – may offer some modest respite to small businesses in the short term. On balance, the advice to businesses to carry on operating as normal feels right – for now, at least. But, of course, that could all change by the time you’re reading this…

Finally, if families are indeed stocking up on board games, I wonder how many will alight upon Asmodee’s highly topical game Pandemic? One individual has certainly seen the humour in the situation, judging by this doctored game card: 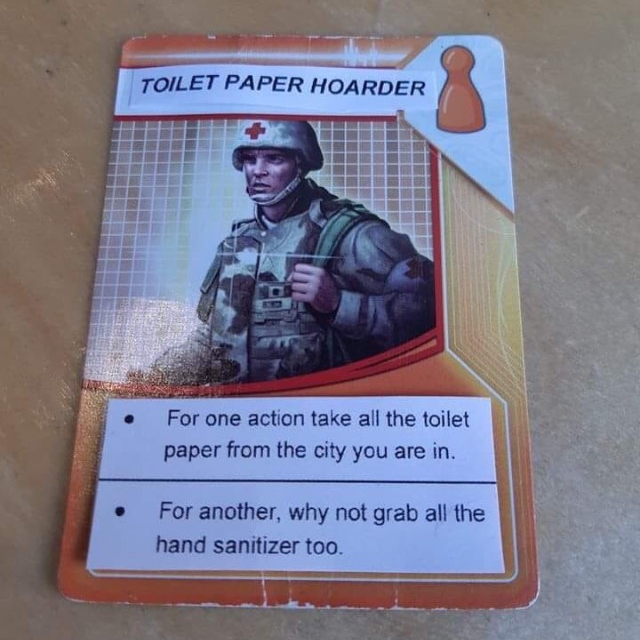