Plenty to celebrate…it’s the Friday Blog!

A tantalizing slice of normality has crept back into my working routine over the past week. We headed to Autumn Fair on Monday, curious to see how a visit to a trade show would play out in the post-pandemic era. Some things don’t change; one star food at five-star prices and chaos in the car parks – presumably all the previous car park attendants are re-training as lorry drivers, leaving the organization of parking to the only people prepared to stand in the baking hot sun in a hi-vis jacket and point vaguely in a disinterested manner for minimum wage. But in the end, it really doesn’t matter; it didn’t take long on the show floor to realise just how much we’ve missed catching up with friends and colleagues from the toy community.

90 minutes in and I had barely moved 50 metres – so many people wanted to chat and as it has been so long since we’ve all met up, many seemed keen to linger just that little bit longer. Masks quickly went out of the window too, as they render conversation all but impossible – and there was a lot to catch up on. That said, for those who felt more comfortable wearing a mask, it really wasn’t an issue – no different to walking around the Hong Kong Toys & Games Fair most years in truth.

While the Autumn Fair had a relatively small toy section, most exhibitors were pleasantly surprised with the number of visitors and, more importantly, the fact that those who were there were in a buying mood. It appears that in the middle of a pandemic, you get a lot less catalogue collectors and general timewasters. Most stand conversations focused on the stock situation: one exhibitor told me the first thing that just about every visitor to his stand said was “Right, what have you got stock of?”

I left feeling encouraged about the prospects for the return of Toy Fairs. Of course, all the usual caveats apply when looking forward to Toy Fair Season (winter is coming etc.), but hopefully there will be no return to the onerous mass event conditions that were being proposed last year (one-way systems, no talking in the aisles…it sounded like being back at school – “No talking in the corridor, Baulch, keep moving”). I am sure that organisers will be mindful that not everyone is yet comfortable in large crowds, so will do what they can to mitigate the potential for over-crowding in certain areas. If all this can be delivered, the overall trade show experience should be nowhere near as alien as some had feared. Next up, the Independent Toy & Gift Show next week – we’re looking forward to catching up with even more toy people there. And as we exclusively revealed this week, Brian Simpson has returned to the SMF Toytown fold after a brief sojourn into the world of sausages, so I’m sure he too will be keen to immerse himself back in the world of toys. Wonder what Alan said when Brian asked him “Well, have I missed anything…?”

In addition to the trip to Autumn Fair, I also attended a very enjoyable Fence Club dinner on Thursday, and the Toy World team had a great meeting with the Toymaster team – it is so good to hear that the specialist sector continues to thrive. Cast your mind back to last March and as non-essential stores were forced to close, the media was full of doomsday predictions about the death of the High Street. Yet 18 months later, almost the reverse has happened: if anything, many High Streets have been reinvigorated by people embracing the shop local ethos that prevailed during lockdowns. Indies have forged closer links with their communities and customers, and many consumers have rekindled their love of shopping in a store where a friendly face and a helping hand from someone who knows and loves toys is all part of the service.

There will always be consumers who want the convenience of online ordering, or to pick up a toy with the weekly grocery shop – and the continuing health of the online arena and grocery toy aisles can only be good for the industry as a whole. But equally, I hope there will always be a place for specialist toy stores which deliver a more magical, memorable experience. Talk to people of a certain age and they will fondly remember their visits to their local toy shop or Toys R Us – a brown box being delivered is never going to elicit the same memories in years to come. So long may the indies thrive – and hopefully, the product shortages that everyone is expecting this year may just help in the short term, in that surely, in this year of all years, cutting prices to the bone or running ‘loss leader’ promotions would be the very definition of madness? The indies always get caught in the crossfire when the big boys fight over market share or lose their nerve over stock levels, but with everything that has happened in the supply chain, hopefully they won’t have to don their tin hats this year…that would at least be one positive from the current situation.

They may not be top of the chart for creating abiding memories, but you have to give credit where it’s due – Amazon’s financial wizards must be top of every head-hunter’s list when it comes to finding the next superstar accountant. The fact that Amazon’s UK arm paid a mere £3.8m additional corporation tax in 2020, despite its sales rising by a whopping £1.9bn, shows just how ‘clever’ they are (let’s go with clever, shall we…although other descriptions are available). And not every retailer sees Amazon as the enemy: Smyths are even offering shoppers a £3 Amazon voucher for online orders placed via VoucherCodes this week. The Galway crowd is incredibly shrewd, so I am sure there is solid reasoning behind the promotion – although I must admit, I am personally struggling to see what that might be.

Finally, I would like to thank everyone who has stopped us in the aisles, called, dropped us an email or posted on LinkedIn or Twitter to congratulate the Toy World team on our 10th anniversary. It really is appreciated. We even got a lovely cake (thanks Playtime PR) and champagne (cheers Toymaster and Just Play). No word or brown parcels from Amazon yet, but there is still time. 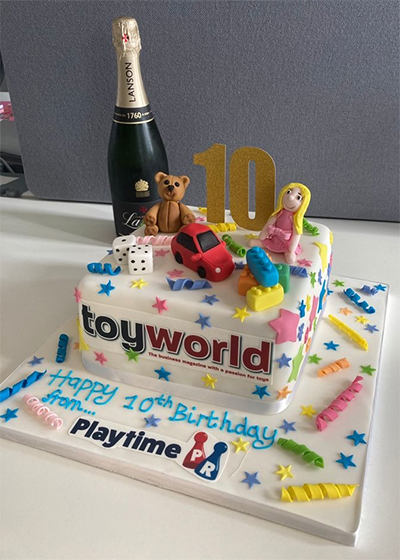