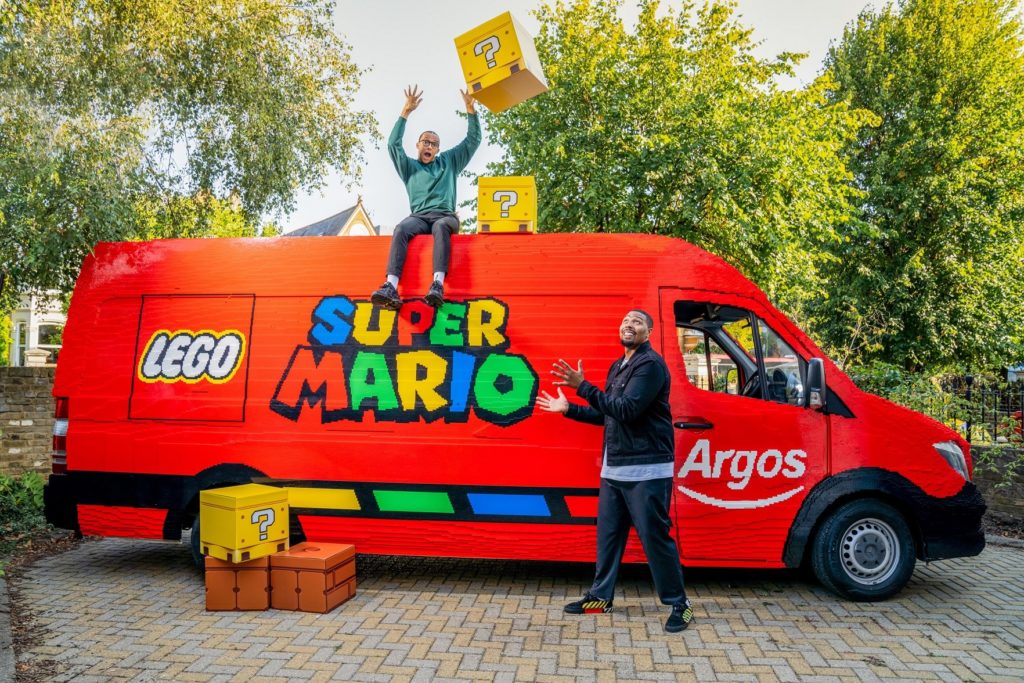 Argos has teamed up with Diversity’s Jordan Banjo and Perri Kiely to unveil the first ever Lego Super Brick delivery van, created to deliver the new Lego Super Mario range and celebrate how more customers are turning to online shopping than ever before.

New research from Argos has found that that almost half (49%) of Brits are now doing the majority of their non-grocery shopping online, a trend that has seen Argos home deliveries increase by 184% in the past year.

In response, Argos has created the Lego Super Brick delivery van, teaming up with life-long Lego fans Perri Kiely and Jordan Banjo to launch the Super Service. Argos is giving customers across the UK the chance to win the full range of Lego Super Mario toys, worth over £300, delivered in the unique Super Brick delivery van, which took 190,000 bricks, a team of 23 people and 800 hours to construct. Those wishing to enter should apply here by Tuesday 29th September, with deliveries being made from Monday 5th October.

Speaking of the launch, Perri and Jordan commented: “We’re thrilled to have had a hand in bringing this incredible Super Brick van to life – it’s exactly the type of thing that used to live in our imaginations when we’d play with Lego growing up. Even as adults, we’re still massive fans of Lego, and we can’t wait for children to be just as amazed as we were when this turns up on their doorstep.”

Juliet Ward, head of toy buying at Argos said: “With so much time spent inside over the past few months, we are really excited to be able to bring people an extra bit of joy along with their new products. Our customers have been huge fans of both Lego and Super Mario for years, and we know they have loved getting hands on with this new range.”

Neither a video game nor a traditional Lego brick-based set, Lego Super Mario is an interactive new product, featuring a Lego Mario figure who collects coins in real-life levels created with Lego bricks. The range of eight products lets kids experience the playful world of Super Mario like never before. Super Mario is brought to life in the physical Lego world and new levels of challenge and styles of play have become part of the iconic Lego experience enjoyed by generations.