The new feature-length special ‘Fireman Sam: Norman Price and the Mystery in the Sky,’ will premiere on Cartoonito on 5th December at 5pm. 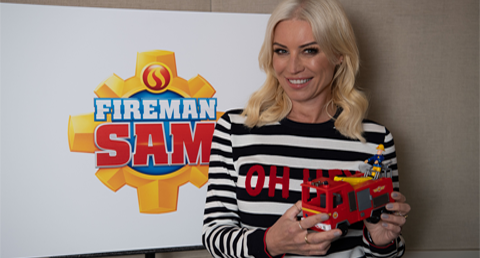 Actress, presenter, singer and dancer, Denise Van Outen has made her Fireman Sam debut after signing up to voice the character of Professor Polonium in the new feature-length special ‘Fireman Sam: Norman Price and the Mystery in the Sky,’ which premieres on Cartoonito on Saturday 5th December at 5pm.

A behind-the-scenes video package and images of Denise recording her part in the studio have just been released to announce her participation and mark the upcoming premiere. In the special, Denise’s character, Professor Polonium, wreaks havoc across Pontpandy as she tries to prove she’s the best hero there is, using her latest invention, the super rescue suit. Unfortunately, things take a turn for the worse, and a series of fires break out across the area, meaning Fireman Sam and the Pontypandy Fire Fighting Team are called into action.

Denise said: “It’s a real privilege and honour to be asked to be part of Fireman Sam. The show is an institution for us in our family and I absolutely love it. My daughter Betsy is going to be so surprised when she finds out I have got a starring role. We always used to watch it together and I am definitely going to be the coolest mum at her school.”

Ruth Henriquez, infant and pre-school marketing director, Mattel EMEA, said: “We’re delighted to bring the brilliant new feature-length special for Fireman Sam fans to watch and enjoy. This is the team’s most action-packed adventure yet so expect all the thrills and spills of Fireman Sam stories with added jeopardy, as mad-cap professor Polonium visits Pontypandy and creates absolute chaos in the village.”

The brand has been a pre-school favourite for over 30 years and brings real life action, rescue, bravery, safety and community storylines to life through the Pontypandy Fire Fighting Team. Based in the (fictional) rural village of Pontypandy, the firefighters are pillars of the community and the heroes of every rescue. The residents of Pontypandy know help is always close at hand thanks to the brave and resourceful Fire Fighting Team.

Since being created, Fireman Sam content has aired in over 155 territories worldwide and has been translated into 36 languages; in 2019 there were over 3b global views on the official YouTube channel. Fireman Sam: Norman Price and the Mystery in the Sky is being distributed by DHX Media, who in 2016 struck an exclusive deal with Mattel to distribute content worldwide.