The ‘Cat Friday’ initiative will be online from today until 29th November in Italy and the UK, and until early December in France. 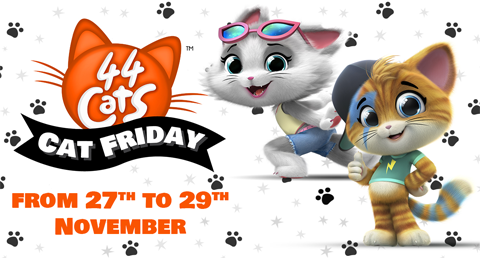 The original multi-territory initiative will be online from today (27th November) until 29th November in Italy and the UK, and until early December in France, where Black Friday has been delayed. Great offers await fans of the show that, with new episodes launching worldwide, is continuing to climb rating charts and win the heart of children and families.

In the UK, 44 Cats rated in the top six of all pre-school series on POP TV in Q2 of this year, with a peak of 5.5m audience in a month. The show increased its total viewership by 50% compared to the first quarter of the year.

The exclusive Cat Friday will be hosted on the official Amazon store of the brand and 44 Cats store only for three days, in a dedicated section, with a wide choice of products at very reasonable prices that  involve children in many different games and will encourage them to have fun at home.