Exclusive: Gary and Duncan Grant on The Entertainer’s partnership projects 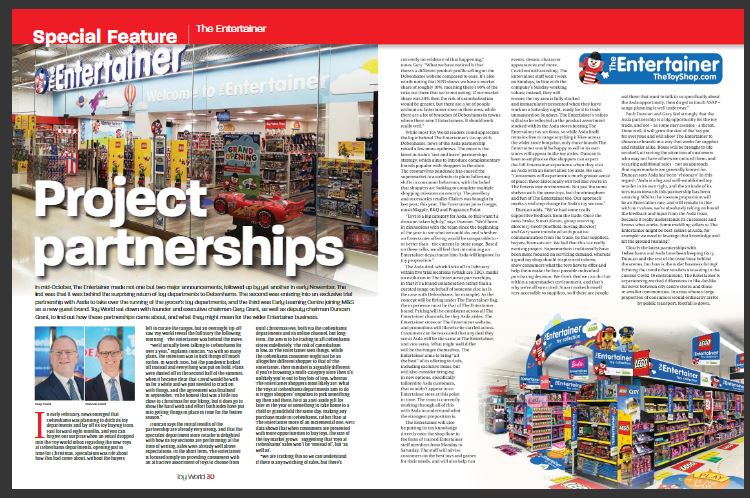 In October, The Entertainer announced that it was entering into an exclusive trial partnership with Asda to take over the running of the grocer’s toy departments, and in November announced that Early Learning Centre was joining M&S as a new guest brand.

News of the Asda partnership raised a few eyebrows. The move is the latest in Asda’s ‘test and learn’ partnerships strategy, which aims to introduce complementary brands popular with shoppers to the store. The coronavirus pandemic has caused the supermarket to accelerate its plans following shifts in consumer behaviour, with the belief that shoppers are looking to complete multiple shopping missions on one trip. The jewellery and accessories retailer Claires was brought in last year; this year, The Entertainer joins Greggs, musicMagpie, B&Q and Fragrance Point.

“Toys is a big category for Asda, so this wasn’t a decision taken lightly,” says Duncan. “We’d been in discussions with the team since the beginning of the year to see what we could do, and whether an Entertainer offering would be comparable to – or better than – the current in-store range. Based on these talks, we all feel that introducing an Entertainer department into Asda will improve its toy proposition.”

Gary says that while Covid is causing uncertainty, it’s also creating opportunities to grow and improve the business over the coming year. Opinions on how long the pandemic may last vary wildly, but most accept that the virus is likely to be with us for a while – and this will change the face of retail. With stores operating at various levels, the team is watching and monitoring the market closely, and while discussions with landlords on potential new opportunities continue as they always have, plans for further expansion are tempered by caution. Assumptions on the levels of turnover that drive affordability, once costs are applied, are expected to be a ‘little subdued’, and Gary says now is not the time to take risks. That said, he adds, there are areas all over the country where The Entertainer would thrive.

“We have a number of strings to our bow, don’t forget. We bought Early Learning Centre in early 2019, and our original goal was to develop the concept through Mothercare, which at the time was a fantastic relationship. We could have taken our toy expertise into Mothercare the same way we have with Asda, but as we all know, that route to market is now closed. We’re now exploring other ways of bringing ELC back to the UK market. At the moment there is one designated store-in-store concept in our Birmingham Bullring store, and we’re running various ELC product packages in Entertainer stores, from very tight to quite broad depending on the size of the store. We also have the popular ELC website elc.co.uk, which also features a limited selection of third-party Entertainer ranges.” “I think it’s very much a case of ‘watch this space with ELC,” Duncan interjects. “We have got big plans – and you’ll be the first to know.”

And among the first to know Toy World was, when news broke in early November that ELC has joined M&S as a new guest brand. The tie-up will see ELC provide a range of toys on the M&S website and app to sit alongside kidswear and gifting ranges for Christmas. The curated range includes several ELC own-brand items and also includes many branded toys including Peppa Pig, Playmobil, Happyland and Paw Patrol.

Gary says: “To relaunch ELC with a retailer of the calibre of Marks & Spencer is an amazing opportunity. It has an incredible database, with around 8m people on it, so we are really looking forward to seeing this new partnership flourish in the run-up to Christmas.”

To read the full, in-depth article with Gary and Duncan, which was published in the December issue of Toy World, click here.