Over 150 players competed to become the UK’s first Grand Champion at event in Milton Keynes. 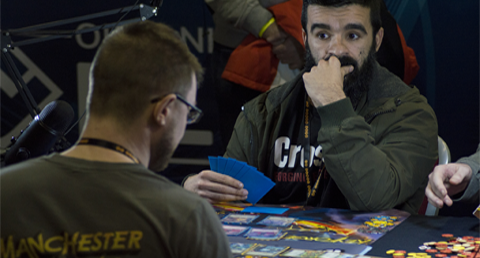 The tournament attracted  players from all over the UK and beyond, with competitors travelling from France, Italy, Germany, Spain and the Netherlands to take part. Hundreds more tuned in to a live video stream.

The tournament was won by Alejandro Rosa Calero of Spain, who was presented with a host of exclusive KeyForge prizes, as well as a paid flight to the USA in order to compete at the game’s World Championship later this year.

KeyForge, which launched to great success in 2018, sees two players using pre-generated decks – each one sold as a complete unit and guaranteed to be a unique combination of cards owned by nobody else in the world – in a race to unlock vaults of untold knowledge on a vibrant sci-fi world. The game offers a low barrier to entry to players, with easy rules and a competitive price point. This was reflected in a diverse range of player demographics at the Grand Championship, which saw children as young as nine competing on equal footing with adults of multiple generations.

With the successful Grand Championships reflecting a strong start for KeyForge as a card game, the brand is soon to move into the world of printed fiction, with a first anthology of stories set in the KeyForge universe to be published this summer by Asmodee’s Aconyte Books fiction imprint.

The Grand Championship event, which was well received by attending players, also featured space for Asmodee’s team of games demonstrators to introduce players to more of the company’s titles, such as Dobble, Pandemic and Hint.