The new film sees Barbie meet Barbie, as both girls compete for Broadway’s coveted Spotlight Solo and discover that competition isn’t only about winning. 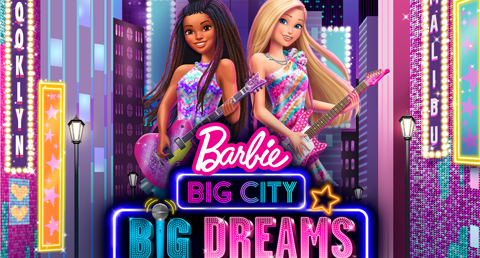 The musical adventure follows Barbie Roberts as she bids farewell to Malibu and says hello to the hustle and bustle on New York City’s Times Square. Upon arriving at a prestigious and highly competitive summer programme at the Handler School for Performing Arts she meets a fellow student also named Barbie Roberts. While they have much more in common than just their names – like their shared dream of making it on Broadway and their passion for dancing – the two girls bond over their complementary differences.

Mattel says the story of Barbie: Big City, Big Dreams is “one of perseverance, mastery of a craft, and multiple paths to success, a story we felt important to tell as we continue our core purpose of inspiring the limitless potential in every child through all our content.”

As the two Barbies compete for the programme’s coveted, once-in-a-lifetime Spotlight Solo, the new friends discover that competition isn’t only about winning; it’s about striving to be your best while bringing out the best in your competitors.

A company spokesperson added: “Barbie has been inspiring, empowering, and entertaining kids for decades. With 36 television specials, and countless episodic and YouTube series behind her, we’ve seen Barbie evolve from a fashion doll to a cultural icon and, in recent years, emerge as a relatable character and role model, sharing her own story and unique, perspective with the world. Whether traveling to exotic islands in Barbie in Rock ‘N Royals or to the Swiss Alps in Barbie & Her Sisters in a Pony Tale, Barbie is always off on a new adventure of discovery. And now, she’s headed for the bright lights of Broadway.”

Barbie: Big City, Big Dreams will feature new characters including sweet, shy and humble Emmie, as well as aspiring costume designer and self-proclaimed fashionista Rafa. The music has been written by Emmy Award nominee Alison McDonald and multi-platinum songwriter and music producer Matthew Tishler. The duo worked with Jamal Simms, who choreographed dance sequences to ensure all animated performances had a realistic, theatrical look and feel.

To complement the new musical event, Mattel will introduce a line of dolls, play sets and accessories, available at retailers nationwide. A 360-marketing programme will support the launch of the film.