The partnership builds on the relationship between Curiosity Ink and Cepia to develop the distribution of the Cats vs Pickles animated series. 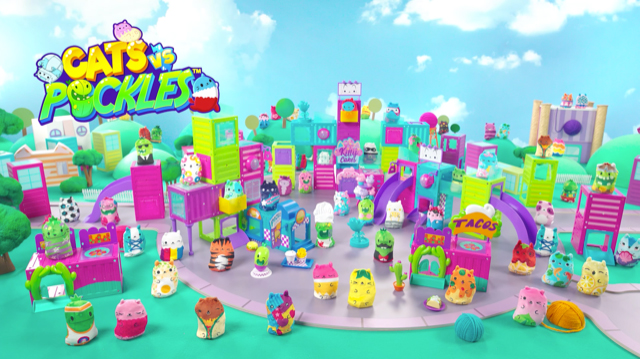 Curiosity Ink Media, a creator, producer and franchise manager of original multiplatform family entertainment, has announced that the company will partner with Cepia LLC to serve as licensing agent for the hit toy and entertainment franchise, Cats vs Pickles. The Cats vs Pickles brand has established tremendous appeal among global fans with collectible bean-filled toys, popular YouTube animated shorts and an app game.

The licensing partnership builds on the Curiosity-Cepia relationship established in 2021, an alliance to develop Cats vs Pickles into a widely distributed animated series featuring the cast of characters from the wildly popular Cats vs Pickles product line. In addition to entertainment content, Curiosity Ink Media has also signed on to develop multiple publishing titles, planned for 2022 and 2023 release. The first book in the series, Everybody Loves Cats vs Pickles is slated for release in September of 2022.

“Cats vs Pickles has all the ingredients of a character-based toy property that can successfully expand into various categories of business,” said Curiosity Ink Media’s CEO, Jared Wolfson. “We believe it is uniquely positioned for continued growth, and are excited to work with the great team at Cepia to further bolster the property, with expanded entertainment content and multi-segmented licensing applications.”

The licensing programme will tap into the growing popularity of Cats vs Pickles, as fans have amassed huge collections and enjoyed the brand’s signature quirky designs. To date, there are more than 600 distinctly styled characters (or “beans” as fans call them) in the collection, including one-eared Vincent van Meow or Triggy Kitty, the blackboard cat covered in math equation. The lovable Pickles are also treasured by collectors, including Leaf Pickleson, the Viking pickle or the tuxedo-clad Fitzgherkin.

A recent survey of over 1300 Cats vs Pickles fans revealed that the average collection size is over 70 characters, with 20% boasting collections of 120 or more in just the past year. The brand has both kid and adult fans, with both boys and girls collecting. Remarkably, more than 60% of all fans report that they regularly take their Cats vs Pickles collectibles with them to school or to work, making it a true lifestyle brand.

“Cats vs Pickles is more than a collectible; to our fans the entire CvP community is an important part of their life that gives them a little happiness and joy,” explained Cepia LLC founder and CEO, James Russell Hornsby. “Cats vs Pickles speaks to the kidult in all of us and, in many ways, is really a comfort pet collectible.”

“We see several hallmarks of a collectible franchise that hits the right notes, with an engaged and growing fanbase that spans demographic groups, clever characters that are beloved and a storyline that has heart,” added Cepia’s chief Marketing officer, Laura Frerichs. “Our CvP community has been actively asking for licensed product in all categories – they can’t wait to show their true colours of Team Cat or Team Pickle.”

Curiosity Ink Media will be taking meetings with select partners during Licensing Expo 2022 in Las Vegas this week.