The toy retailer has also unveiled its chosen five ‘Magic Makers’ for this year’s festive season. 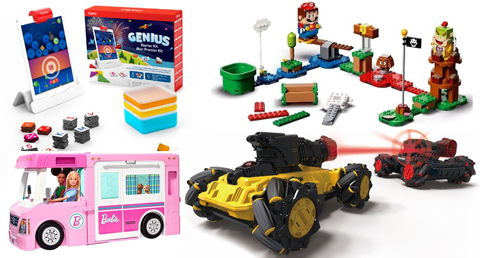 This Christmas will see more inter-generational play and classic toys that create magical moments to bring people of all ages together, according to Hamleys top buyers, who have unveiled their hot predictions for the 2020 festive season.

Whilst there’s new interactive and educational tech such as the pre-school Rollin’ Rovee with nearly 200 songs, sounds and phrases, and tablet-based Osmo Genius, offering hands on learning and digital fun, the list this year features plenty to bring the family together with classic board, dice and card games – from Uno Flip and Quick Draw to Cluedo Liars and Monopoly for Sore Losers.

The list also contains special toys exclusive to Hamleys in the shape of the Ferrari Foldable LED Twist Scooter and Greedy Monkey, the brand new multi-level dice game from Diicii. It also mirrors the recent rise in pet ownership with a number of lovable stress relieving animatronics including the adorable Present Pets, which miraculously unbox themselves, and Hamleys-own singing and dancing Mini-Movers.

Victoria Kay, head of buying at Hamleys said: “Creating some simple Christmas magic feels more important this year than ever and we think there’s lots of memorable and affordable fun to be had with our 2020 hot picks. From clever tech to lovable animatronic pets and classic family games to be played around the table, we can see carefree, shared play and togetherness featuring heavily this year.”

Hamleys has also revealed its list of so-called ‘Magic Makers’, as follows: