With over 500 entries received, the campaign’s donation target was exceeded. 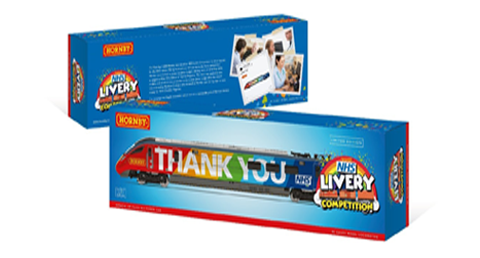 The NHS Livery Competiti on was launched on April 22nd to support and raise further awareness for key workers. The campaign proved to be extremely successful with over 500 livery entries received from adults and children alike.

After four weeks the winner was announced, following all entries having been judged by Mike Wild, editor of Hornby Magazine. Mike said, “It was a tough choice and a close run competition with so many brilliant entries, but James Lodge’s design caught our eye with its creative scheme combining the rainbow colours, the NHS logo and the ‘Thank you’ and ‘Stay Safe’ messages. A great design which looks super on the Class 800 body shell.”

Alongside James winning a Hitachi IEP Class 800 Power Car featuring his very own livery, a second model was up for grabs. To be in with a chance of winning, donations were invited to be left on the Hornby Just Giving page, to raise money for NHS Charities Together. This winner was announced as Matthew McAdam, who was thrilled to have been selected at random. Both winners will receive a very limited Class 800 Power Car featuring the winning livery, in a bespoke box, highlighting an official Hornby R number and a certificate.

Throughout the campaign, donations have been pouring in and Hornby is delighted to have well and truly exceeded the target initially set of £1000. The grand total was £3,385, all of which will be donated to NHS Charities Together. The Hornby Just Giving page remains open and donations are being accepted until 12th June.