The new (ab)normal…it’s the Friday Blog!

As a teenager, I loved the Mel Brooks film Young Frankenstein. Arguably the movie’s best line is spoken by Professor Frankenstein’s assistant, played by the legendary British comedy actor Marty Feldman. When quizzed as to whose brain he had put in his master’s new creation, which had begun to behave erratically, he replies: “Abby something. Oh yes, abby normal.”

It reminds me of where we are now – very little about the situation we all find ourselves in is normal. Here and there, you can find little pockets of welcome familiarity. Our May issue landed on doormats and (home) desks this week: you can read the digital version of the issue here. The Toy World editorial team has worked exceptionally hard to bring you a snapshot of the toy market during this unique moment in time: a no-nonsense, unbiased reflection of the challenges and opportunities facing the toy industry. Featuring a wealth of exclusive content which has not previously appeared online, it is well worth diving into over the coming days.

Out in the market, traditionally, this is a planning time of year rather than a major trading period; despite the uncertainty, large retailers are still planning and starting to place their autumn winter orders, while the stores which are still trading are re-ordering lines which have sold well.

However, beyond the day-to-day transactional activity, beneath the surface, every business is planning for what comes next – and that will be no small task. Speaking to one major retail owner this week, he admitted that his team is making decisions based on what he described as “major assumptions”- literally, we are all entering ‘best guess’ territory.

So, on the balance of probability, what might the new (ab)normal hold in store for us all, whether out at retail or in our own offices and factories? Based on conversations, plus articles I have read and a healthy amount of blind guesswork, here are a few thoughts.

Emerging from lockdown will be gradual – the grand re-opening of the UK will take place in phases, rather than en masse. There will be no great ‘armistice’ moment where we rejoice in the streets at vanquishing our foe. A new Ipsos Mori poll suggests that the UK public remains cautious about lifting lockdown: 70% say they don’t want it lifted until the virus is fully contained, while 71% say they’d be nervous about leaving home even if it was. Interestingly, Brits were the most cautious of 14 countries polled. The US data paints a similar picture: more than 50% surveyed believe that movie theatres and concert venues should not open until there is a vaccine, while only 40% of ‘avid’ sports fans and movie-goers would attend events if they took place before a vaccine is available. So, it seems likely that online sales will remain crucial for retailers for a while yet.

The in-store experience itself is going to be very different. Out goes ‘experiential retailing’, for now at least– there will be precious little browsing, most people will be aiming to get in and out as quickly as possible. One-way routes around the store will cause much confusion, especially when you get halfway round and realise you’ve already passed the item you want. There won’t be as much hands on trying out of product – ‘you touched it, you buy it’ could become the new ‘break it and it’s yours.’ Indeed, try-me packs will become a lottery – but not in a good way.

Perspex shield manufacturers will be major winners: it will be like the dot.com boom – buy shares or even start up a company making them now. Every till will need them.

Getting into stores won’t be entirely straightforward, as numbers will need to be strictly controlled. Will some shop staff need to retrain as bouncers? That will make for some interesting team discussions…

When you finally make it inside, hopefully having avoided the queue from the neighbouring store (I wonder who decides which way the queues will go in a shopping centre?), some customers may be wearing social distancing buzzers that go off when anyone else gets too close to them. That won’t be at all annoying or cause any disagreements.

Expect many variations on click and collect, such as products being dropped to your car, or given to you outside or at the front of the store. Random ‘lucky’ bags made up to an agreed value with mystery items may yet prove to be victorious at next year’s Toy of the Year award. Who knows, maybe selling items at cost price (or less) to ‘drive footfall’ may finally be consigned to the metaphorical dump bin of history? And how will that final week leading up to Christmas work – the week when toy stores are traditionally jam-packed with last-minute shoppers. Will consumers wait until the last minute this year, as they have in recent years, and risk encountering huge crowds?

Indeed, whether out shopping or in the office, masks will be de rigeur: we will all look like a poor man’s Bane from Batman. Temperature checks will become commonplace: I feel for women of a certain age. At the office, we won’t need posters to guilt trip us into using the stairs: lifts simply won’t be as popular as they once were. We may end up talking about ‘hand sanitiser station moments’ rather than water cooler moments.

Production lead times will be longer; the measures which factories will be forced to introduce will inevitably have an impact on productivity. The same is true for online warehouses; I am sure retailers have found that consumers expect far quicker deliveries than are realistically achievable under the new working conditions.

Big companies will have fewer, shorter meetings: although to be fair, this can only be a good thing for all concerned. Facebook has banned all meetings of more than 50 people until June 2021 – make of that what you will.

Finally, could these rather fetching ‘one metre hats’ become a new fashion sensation? It’s certainly one way to avoid disagreements over whether someone is maintaining the correct distancing etiquette. I can just see us all wearing one at the trade shows next year… 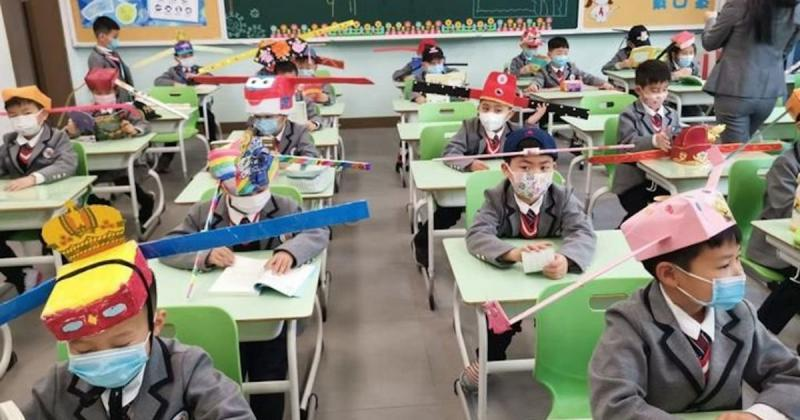