The Lionesses make history as the first ever all female Subbuteo Main Game will be launched to the UK market this May. 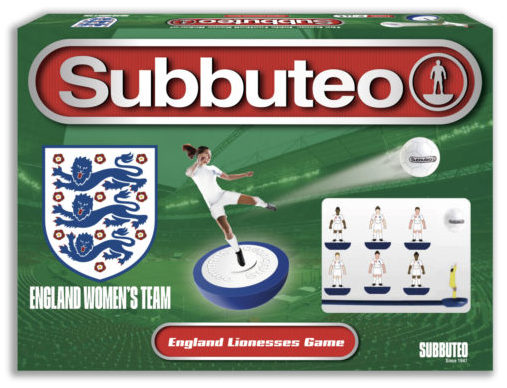 2021 will see a UK-first as University Games launches the highly anticipated Official England Lionesses Subbuteo Main Game. The set will be available this May and the detailed Lionesses players will sport the iconic England kit and feature players of differing ethnicity.

The fully licensed Official England Lionesses Subbuteo Main Game will contain the 11-player Lionesses Team and an 11-player Red and White Team, along with the Subbuteo pitch, ball and goal sets.

“Subbuteo was a best seller for 2020, following a successful re-launch and a heavyweight multi-media campaign, which will continue throughout 2021 and feature this new addition to the range,” commented Mark Jones, sales director at University Games.

The England Lionesses have been an inspiration to young players over the past few years and their success at the 2019 FIFA Women’s World Cup has helped encourage a growth in football participation across all levels.

Mark believes the new Lionesses Set will make big steps to continue to bridge the gap between the younger generation and current Subbuteo enthusiasts. “We are all ever hopeful for a football-themed summer, with the Euros currently planned to kick off this June. The Women’s European Championships are now scheduled for summer 2022, so the new England Lionesses Main Game is certain to be a very welcome and timely addition to the range.”

The new Lionesses Main Game will join a comprehensive Subbuteo range that includes the Main Game and an Official England Main Game as well as the new Virtual Assistant Referee (VAR) Set and enhanced Fences Set accessories that launched earlier this year.