Anyone who has been part of the toy trade for any length of time knows what a close-knit community it is. And within the over-arching world of toys, there are numerous splinter groups that have formed an incredibly close bond. I have been fortunate to have spent time with two such groups this week.

The specialist independent UK toy channel is a vibrant, passionate community, and this week saw the coming together of the indie tribe in Harrogate for the Toymaster May show. This was the first May show in three years, so expectations were high – and the event delivered on every level.

Retailers came from across the length and breadth of the UK and Ireland – especially Ireland in fact. Perhaps unsurprisingly, as most Irish members had not been able to make it over for the London Toy Fair in January, the chance to meet with suppliers and see new lines was even more important for them, and they duly arrived in their droves.

I saw retailers from all parts of the country, and even Toy Barnhaus’ Mark Buschaus made it, despite being on crutches – respect for the dedication required to tackle the Majestic Hotel basement and the marquees on one leg. The marquees were so warm you could have grown tomatoes in them – but in the grand scheme of things, no-one cared, they were just so delighted to be back with their peers and customers again (To be fair, I heard more grumbling about the industry’s ongoing issues with 3PL warehouses than I did about the sauna-like marquees, but that’s a subject I am sure I will be returning to in the weeks to come).

There was a healthy mix of Toymaster members, members of other buying groups and retailers who aren’t (yet) members of any group in attendance – indeed, I heard there was a fairly even split between members / non-members on the first day. I also gather that Toymaster signed up several significant new members ahead of and at the show, which is great news for the continuing success of the group.

As ever, the atmosphere was relaxed and informal, but ultimately, it works from a business perspective. Orders were being written, particularly on catalogue lines and the special deals on offer (side bar note to suppliers – if you send details of special offers to members ahead of the show, try not to make it so they sell out before the event has even begun and leave many retailers disappointed…).

The egalitarian nature of the show puts product centre stage – broadly speaking, everyone gets the same space to showcase their new launches, which creates a relatively level playing field for exhibitors of all sizes. A mid-year show also works for the indies from a timing point of view; with the product launch calendar and the arrival of stock far more fluid these days (partly due to ongoing logistics challenges and partly because there is no late summer Argos catalogue around which everything has to revolve), May is a great time to be evaluating and placing orders for the second half.

Nowhere is the community spirit of the show more evident than in the evening events. Sure, you can get better food at restaurants at Harrogate – but that totally misses the point. For my money, the evening events are unmissable and a crucial part of the whole experience, with fantastic entertainment and a real sense of camaraderie. On the night we were there, we saw Golden Teddies presented to Wilton Bradley’s Russel Lipman and Irish agent Paul Wright, an appreciation of Keith Thompson as he retires from Playmobil after 41 years in the trade and Yogi Parmar serenaded with a mass chorus of happy birthday and given a cake (made by Anne Donald, a Toymaster member from Peterhead) to celebrate his special birthday

The following night saw a host of members honoured with a 25-year membership award, which says a lot about the special relationship between the group and its members. On both nights, I am sure that many new friendships were made and cemented – it’s that sort of event, made all the more special after a three-year hiatus.

We all know there are challenges ahead – by all accounts some stores have had a strong start to the year, while others are finding the going a little tougher. But as I have said before, we are collectively better placed to face the challenges if we keep talking and working closely together – the Toymaster show plays an invaluable role in helping to keep that conversation going.

The same is true of Distoy, the London-based distributor show; it was unfortunate that Toymaster and Distoy ran concurrently this year (no-one’s fault – blame the Queen and the Platinum Jubilee if you are looking for a scapegoat), but for those of us who like to attend both shows, it has been a week of seemingly non-stop travelling. But without doubt it was worth it; like Toymaster, Distoy has built up a loyal community of exhibitors and attendees from across the globe over the years, and it was wonderful to see so many people from the international toy market at the show yesterday.

It was also great to start looking at product that won’t be arriving on shelves for another 12 months or more – yes, the cycle is starting all over again. People who were able to spend more time at Distoy than me suggested that there is a decent crop of product coming through for next year – it feels like companies are more confident about investing in new product development as the world slowly returns to normal. And I am sure a lot of people will be as relieved as I am that the show returns to its traditional slot towards the end of May next year, avoiding another clash with Toymaster.

So, thanks to all those people who found time in their busy schedules to stop and chat with me and the Toy World team this week. We’ll carry on playing our part, bringing you all the latest news from all parts of the toy community – our own unique brand of community service.

I’ll leave you with two of my favourite pictures of the week: the first featuring the revenge of Steve Kerrison, whose sartorial elegance was enhanced with this one-off tie featuring one of Steve’s biggest toy trade heroes – and someone else having a little too much fun sitting on a throne, starting his own Jubilee celebrations just a bit early. 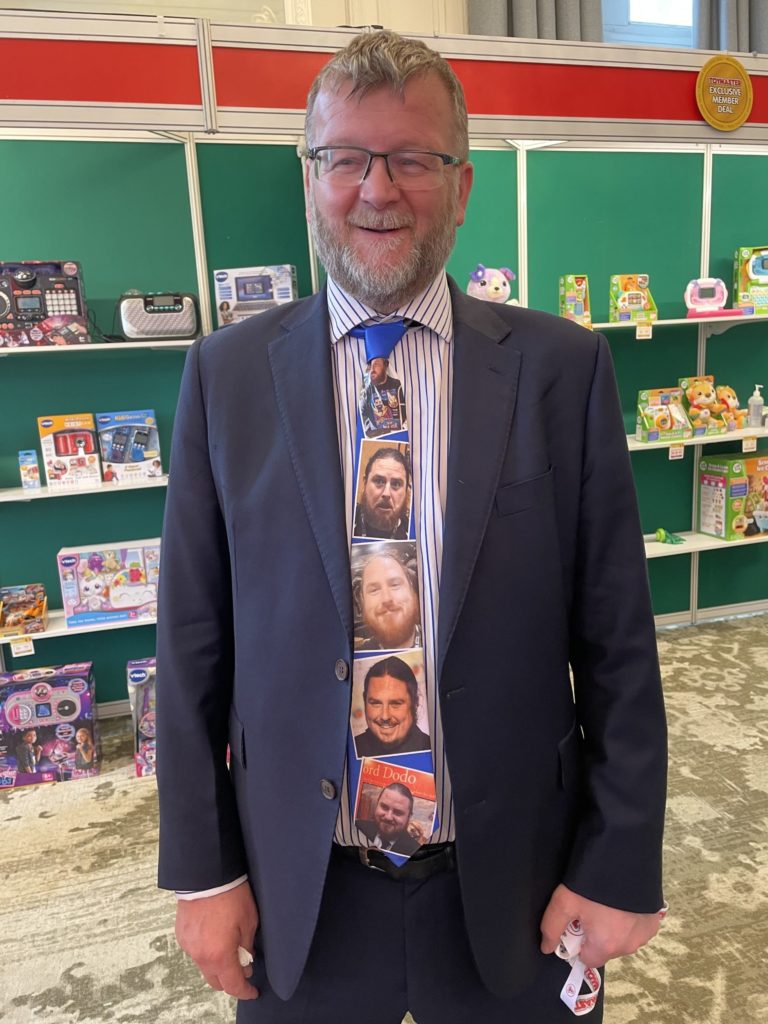 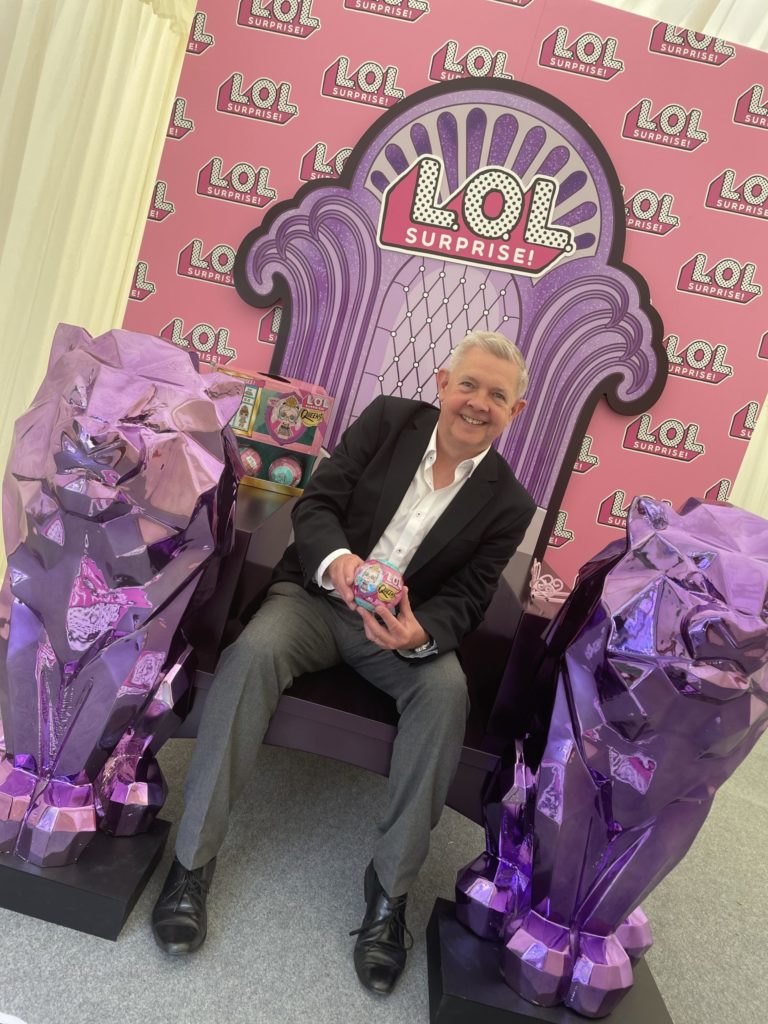