Just Play was announced as Global Master Toy partner for Blue’s Clues in 2020, and has revealed details of the new master toy range. 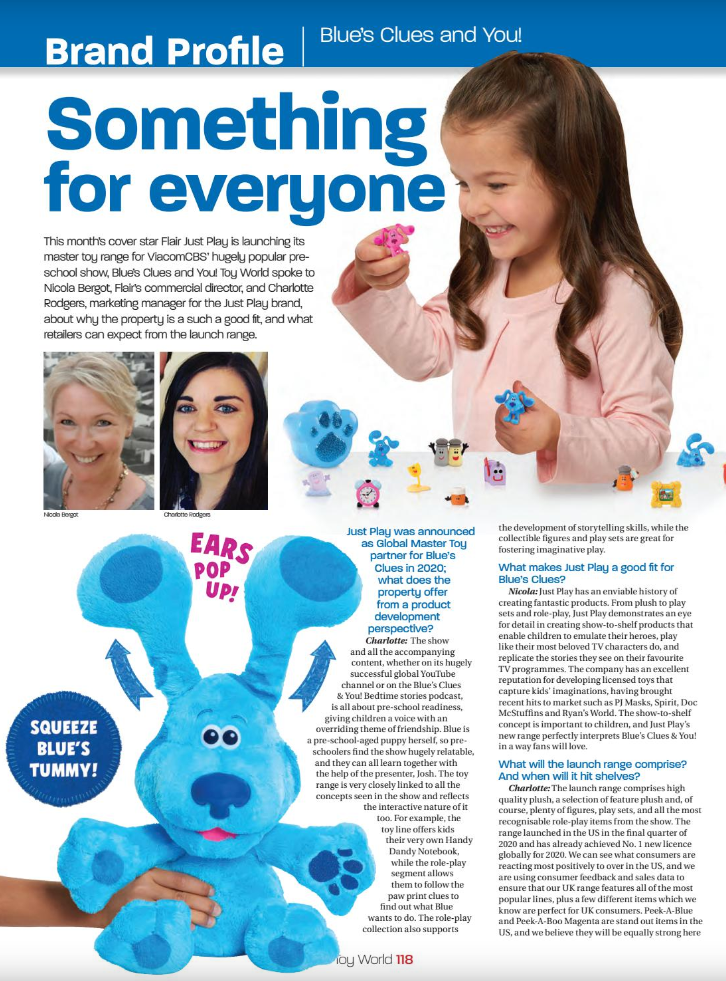 Toy World’s April cover star Flair Just Play is launching its master toy range for ViacomCBS’ hugely popular preschool show, Blue’s Clues and You! We spoke to Nicola Bergot, Flair’s commercial director, and Charlotte Rodgers, marketing manager for the Just Play brand, about why the property is a such a good fit, and what retailers can expect from the launch range.

Charlotte explained what the property offers from a product development perspective, highlighting the show’s appeal to its young audience. “Blue is a pre-school-aged puppy herself, so preschoolers find the show hugely relatable,” she told us, “and they can all learn together with the help of the presenter, Josh.”

The toy range is very closely linked to the concepts seen in the show and reflects the interactive nature of the episodes. Just Play has built on its experience of developing licensed toys that capture kids’ imaginations, having brought recent hits to market such as PJ Masks, Spirit, Doc McStuffins and Ryan’s World. “Just Play demonstrates an eye for detail in creating show-to-shelf products that enable children to emulate their heroes, play like their most beloved TV characters do, and replicate the stories they see on their favourite TV programmes,” Nicola explained. “The show-to-shelf concept is important to children, and Just Play’s new range perfectly interprets Blue’s Clues & You! in a way fans will love.”

Charlotte and Nicola went on to detail the lines that will make up the launch range, including  high quality plush, feature plush and figures, play sets and  role-play items from the show. Feedback in the US, where the range launched in Q4 2020, has been positive, and sales data is being used to fine tune the UK range.

Creatives that cover a wide variety of items from the toy line, and have been made with parents as well as children in mind, will ensure the launch is well supported from a marketing perspective, with a 360 degree marketing campaign.

In addition to Blue’s Clues & You!, Flair has further new Just Play ranges and standout items for autumn/winter, supplementing the company’s evergreen portfolio and other, earlier introductions, such as the recently unveiled Love, Diana range. In tandem, the GP Flair portfolio also offers a strong lineup.

Nicola added: “We have certainly done a lot of learning over the past year, and have become more nimble and adaptable in the process. We will be taking this learning into post-lockdown life to maximise opportunities and ensure that they deliver the biggest impact for us and for all our retail partners going forwards.”

To read the full article, which appeared in the April issue of Toy World and goes into more depth about the new products set to be launched, click here.