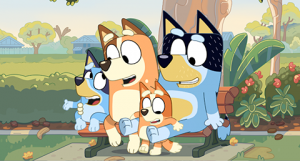 BBC Studios has announced an array of new partners for the animated pre-school series Bluey.

Produced by Ludo Studio, the series is already a hit with families in Australia, Bluey’s home market, and in the US. It’s currently the number one children’s programme on metro broadcast television in Australia for 2020; series one has amassed over 261m views and series two, which premiered in March, has already surpassed 43m views on ABC iview. Stateside, Bluey reached 16m total views across Disney Channel and Disney Junior in Q4 2019. The show is also now available for UK viewers to watch on Disney+ and there is more Bluey in the works, with series three set to commence production later this year.

Global master toy licensee Moose Toys will debut Bluey plush and plastic toys at UK retail in autumn 2021. Since launch in its home market Australia, Bluey toys by Moose have been selling at a record rate, and performed likewise when they arrived in the US.

Ravensburger has been appointed the licensee for jigsaw puzzles with lines slated for release in tandem with the Moose ranges hitting UK retail. A selection of softline partners are also lined up for the UK including: TDP & Aykroyd for nightwear, swimwear and essentials; Dreamtex for bedding and home textiles; William Lamb for footwear and bags; and Roy Lowe & Sons for socks. These ranges will launch at retail from summer 2021 onwards.

BBC Studios recently extended its deal with Penguin Random House to make it master publishing partner for Bluey, now holding global rights to the Bluey titles (excluding China). New books are expected to hit shelves in the UK during the second half of 2021.

Immediate Media has acquired worldwide rights for Bluey magazines and its first UK issue is anticipated to hit newsstands from summer 2021.

Bluey follows the adventures of a lovable and inexhaustible six-year-old Blue Heeler, who lives with her dad, Bandit; mum, Chilli; and four-year-old little sister, Bingo. In every episode, Bluey uses her limitless Blue Heeler energy to play elaborate games that unfold in unpredictable and hilarious ways.