Six hand-picked episodes of Dennis & Gnasher: Unleashed! will be screened across the UK and Ireland during October half term. 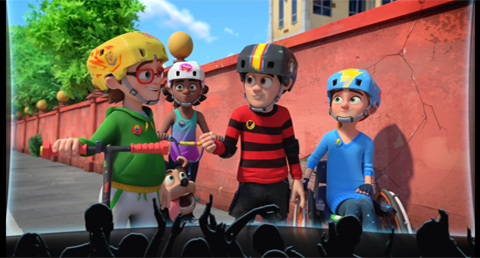 Six hand-picked episodes of ‘Dennis & Gnasher: Unleashed! On The Big Screen’ will be screened across the UK and Ireland during October half term 2020. The episodes will air back to back in a 70-minute long screening, which will also include bespoke interstitials featuring jokes and songs to get kids laughing and singing along in between episodes.

Dennis & Gnasher, along with his friends Rubi, JJ, Pieface and his pet potato Paul, get up to their own hilarious brand of mischief and mayhem in specially chosen episodes - “Bathmaggedon”, “Beat the Bus”, “P Factor”, “Spud U Love”, “Things Get Chilli”, “Molar Power” and a sneak peek at the unaired episode “Thumb Wars”.

Vanessa Andreis, director of franchise planning and partnerships at Beano Studios, commented: “We’re very excited that our much-loved Dennis & Gnasher: Unleashed! Season Two will be heading to cinemas across the UK and giving kids their first cinematic experience with their favourite Beano characters. Bringing Dennis & Gnasher’s adventures to the big screen will not only promise a 'blamtastic’ day out for families, but also introduce a new generation to the wonders of big screen entertainment.”

Greta Bisetto-Donelan, director of content at Generation Entertainment, added: “We are incredibly proud to be working with Beano Studios and some of the top exhibitors in the market, to bring such an iconic brand to the big screen. As we continue to expand our content distribution capabilities, cinema remains one of our key priorities. This is where our clients can showcase their brands and content, in a quality environment, to an engaged audience.”