Thames & Kosmos kits from the Signature Series and Alternative Energy range are being restocked in time for Christmas due to popular demand. 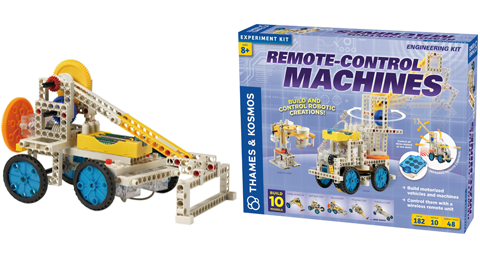 Thames & Kosmos has announced the restock of a number of popular kits within its higher ticket price ranges; Electricity & Magnetism and Remote Control Machines from the award-winning Signature Series, alongside the Air & Water Power kit from its Alternative Energy range.

The bestselling Electricity & Magnetism kit from the Signature Series has been hotly anticipated by customers. The high-quality STEM set lets budding physicists aged eight and above conduct more than 60 electrifying experiments with circuits and magnetic contraptions to learn about electricity and magnetism, and how these two fundamental properties are closely related.

Another bestseller from the Signature Series, the Remote-Control Machines, will also be restocked in time for Christmas deliveries, with backorders heading out from this week onward. Children from the age of eight and adults alike get to assemble ten models, demonstrating different ways in which the motors can be used and can also let their imagination run free by designing their own remote control creations.

The popular Air & Water Power kit lets budding STEM enthusiasts from the age of eight build their own models powered by air and water pressure to learn about the laws of physics. This unique kit allows its user to build two different air-and-water-powered systems: water-jet propelled cars and hydro-pneumo (air pressure and water pressure) powered engines.

“We are over the moon to share the restock of these popular kits with our customers. We’ve had large numbers of back orders on these due to their popular nature, particularly in the run up to the busy Christmas period,” commented Jo Drage, sales director. “Parents and grandparents alike will appreciate the extraordinary quality of these bestsellers, which is why Thames and Kosmos can pride themselves on such a loyal customer base.”