For one whole year, the successful candidate will be in charge of testing new toys before they launch in Ikea stores across the UK and Ireland. 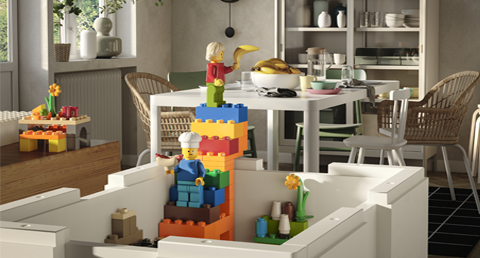 As part of its ongoing mission to encourage play and creativity in the home, Ikea is seeking a chief play officer. Posting the job description on LinkedIn, the retailer says the role is strictly open to children aged 4-12 only – no adults allowed.

For one year, the successful candidate will be in charge of testing new toys before they launch in Ikea stores across the UK and Ireland. Toys that have launched recently include the new Bygglek collection in collaboration with Lego that provides fun, functional and playful storage solutions for kids and adults alike, and the Jӓttelik range, which blurs the lines between fantasy and reality with dinosaur-themed soft toys and bedroom accessories.

Ikea’s national charity partner is Barnardo’s, a children’s charity supporting vulnerable children in the UK and Ireland. Most recently, Ikea released its sixth annual Sagoskatt collection – a range of soft toys designed by children, for children, selected through an international drawing competition with all proceeds going to Barnardo’s.

Thomas Parker, children’s business leader at UK & IE at Ikea, commented: “When it comes to play, Ikea believes the home is the most important playground. Space and money should never be a barrier, which is why we offer a vast range of affordable games and activities. These allow children to use their imagination through role play, physical activity and creativity, wherever they may be. The creation of the chief play officer role puts the focus back on play, and gives the power of creation to those who really know their stuff.”

Candidates can apply for the role by emailing either a bio or video of themselves to chiefplayofficer@hopeandglorypr.com by 4th January 2021. In return, all tested toys will be the successful candidate’s to keep. The role will last until 31st December 2021.

The full job specification can be found on LinkedIn, here.