Distributed in the UK by Flair, the award-winning Marvel Battle Cubes will welcome play sets and a new animated series later this year. 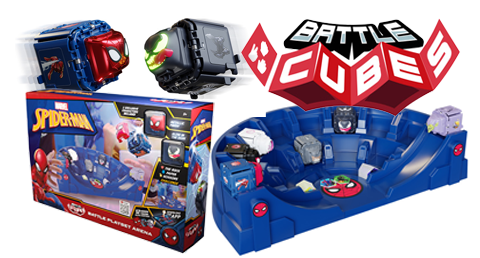 Launched earlier this year thanks to a partnership between Eolo Toys and Boti, Battle Cubes introduced some healthy competition to the pocket money sector. Kids can use the cool and collectible licensed Battle Cubes to challenge their opponents to a rock-paper-scissors-style fight. To play, each battler must first select their secret attack. Then the opponents launch their Battle Cubes, with the winning cube capturing the loser using unique, patented transformational technology. The range launched in March with two licensed versions – Marvel Spider-Man and Marvel Avengers – and a total of 48 tokens to collect, exchange and turn into a unique mini puzzle.

Marvel Battle Cubes is performing well across global markets, with more waves and licences on the way for this year. The combination of rock, paper, scissors play, fidget features and a major licence has allowed the brand to resonate among fans and paved the way for larger play sets that are due to hit shelves in the second half of 2022. The play sets will allow kids to battle even more friends at the same time.

In addition, the redeemable codes provided via the Battle Cubes game app let kids can combine their battles physically as well as digitally. As a result, Marvel Battle Cubes is gaining attention on multiple social media platforms, particularly TikTok. Kids love sharing videos of their battles, explaining which are their favourite characters and challenging other users.

Following the success of the Marvel series, Battle Cubes now welcomes the National Hockey League (NHL) to its licensed portfolio, and Eolo and Boti say more surprises are on the way for autumn/winter 2023. In line with its focus on content-driven IP, Eolo is also launching an animated series that will be broadcast online via YouTube and across digital channels.

Eolo Toys’ sales director, Jose Diaz, explained: “We’ve received a lot of positive comments on the brand’s performance. In particular, our key partners in Canada, the UK, Germany, Netherlands, Spain and Greece have reported their confidence in the sell out collections. The product’s distinctiveness stems from the combination of the game mode, the combination of the Marvel licence and the game software, creating an appealing concept for the boys’ toy market. Our teams are actively working on new advancements that will be launched very shortly, including hot licensing. Battle Cubes definitely has staying power.”

The Marvel Battle Cubes line is distributed in the UK by Flair.