Exclusive: Get crafty! The latest from Craft Buddy 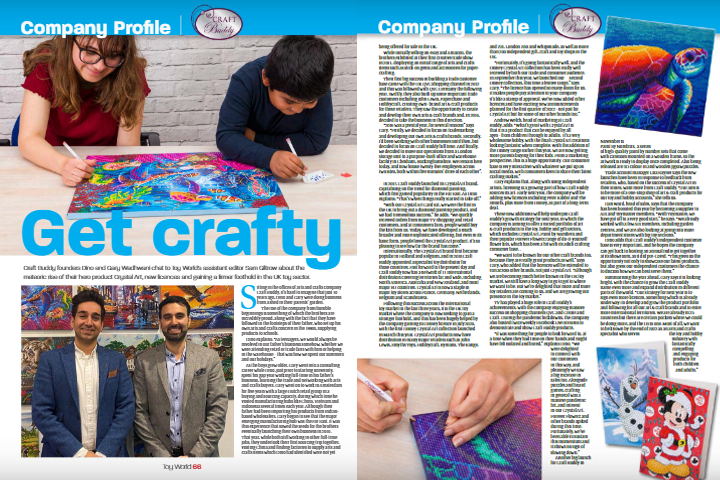 Toy World’s Sam Giltrow reports from the offices of arts and crafts company Craft Buddy, noting that just 10 years ago, Dino and Gary were doing business from a shed in their parents’ garden.

The rise of the company from humble beginnings is something of which the brothers are incredibly proud, along with the fact that they have followed in the footsteps of their father, who set up his own arts and crafts concern in the 1990s.

In 2017, Craft Buddy launched its Crystal Art brand. As Dino explains: “That’s when things really started to take off. Today, we have developed a much broader and more sophisticated offering, but even in its basic form, people loved the Crystal Art product. It’s so pleasing to see how far the brand has come.”

Following success across the international toy market in the last three years, it is the UK toy market where the company is now seeking to gain a stronger foothold, and this has been hugely helped by the company gaining its Disney licence in July 2020, with the first Disney Crystal Art collection launched in March this year.

“It’s going fantastically well, and the Disney Crystal Art collection has been really well received by both our trade and consumer audience,” says Gary. “In September this year, we launched our second Disney collection, this time a festive range. The licence has opened so many doors for us.”

New range additions will help underpin Craft Buddy’s growth strategy for next year, in which the company is aiming to offer a varied portfolio of art & craft products to the toy, hobby and gift sectors, which includes Crystal Art, Paint by Numbers and the popular Forever Flowerz range of do-it-yourself flower kits, which has been a hit with its adult crafting consumer base.

To read more about the ongoing development of Craft Buddy, its latest licences and exciting new announcements planned for Q1 2022, read the full interview, which appeared in the November edition of Toy World, here.