Rachael Simpson-Jones speaks to a selection of leaders within the Dress-Up and Role-Play categories to find out more. 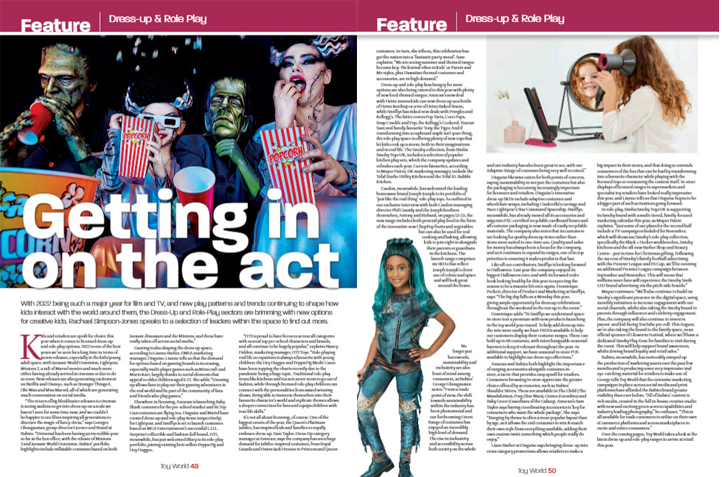 Kids and retailers are spoilt for choice this year when it comes to licensed dress-up and role-play. 2022 is one of the best years we’ve seen for a long time in terms of movie releases, especially in the kids/young adult space, with Jurassic World Dominion, Lightyear, Minions 2, a raft of Marvel movies and much more either having already arrived at cinemas or due to do so soon. New releases are also generating excitement on Netflix and Disney+, such as Stranger Things 4, Obi-Wan and Miss Marvel, all of which are generating much conversation on social media.

“The return of big blockbuster releases to cinemas is seeing audiences get into dress-up on a scale we haven’t seen for some time now, and we couldn’t be happier to see films inspiring all generations to discover the magic of fancy-dress,” says Georges Ghougassian, group director Licence and Brand at Rubies. “Universal has been having an incredible year so far at the box office, with the release of Minions 2 and Jurassic World Dominion. Rubies’ portfolio highlights include inflatable costumes based on both Jurassic dinosaurs and the Minions, and these have really taken off across social media.”

Gaming is also shaping the dress-up space, according to Lianne Barber, EMEA marketing manager, Disguise. She tells us: “Dressing up allows fans to play out their gaming adventures in the real world and be part of the community of fans and friends who play games.”

Nancy Fielden, marketing manager, HTI Toys, adds: “Role-playing real life occupations is always a favourite with young children: the Hey Duggee and Peppa Pig Medic Cases have been topping the charts recently due to the pandemic being a huge topic. Traditional role-play items like kitchens and tea sets never seem to go out of fashion, while through licensed role-play children can connect with the personalities from award winning shows.”

For more on these and other many and varied options currently available in the Dress-Up and Role-Play sectors, read the full article, which appeared in the July edition of Toy World, here.