In this month’s Talking Shop, Sam Giltrow spoke to no less than 15 indie retailers to find out how Christmas trading was for them, and how they see the year ahead. 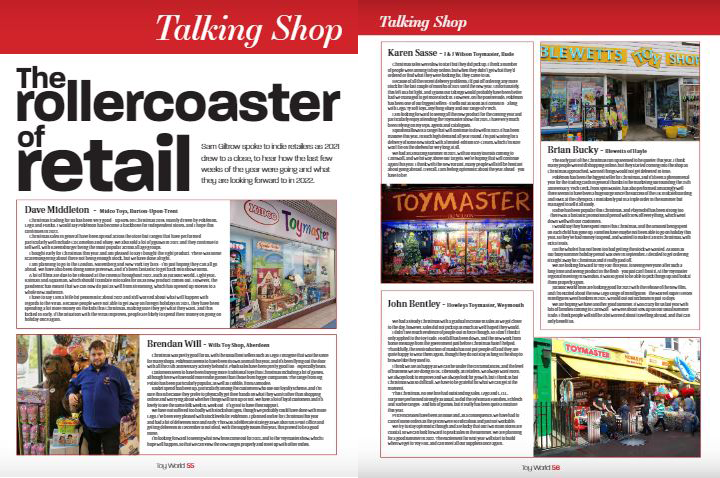 Many of those we spoke to agreed that Christmas trading had started earlier, with fears of stock shortages and the threat of possible lockdowns looming, spurring shoppers into heading to the High Street as early as October. Given the disappointment of Christmas 2020 when families were unable to meet up and celebrate, customers were also going all out to celebrate for 2021 with many retailers reporting a rise in basket spend.

“Christmas trading for us has been very good – up 60% on Christmas 2019, mainly driven by Pokémon, Lego and Funko,” said Dave Middleton, of Midco Toys in Burton-Upon-Trent. “I would say Pokémon has become a backbone for independent stores, and I hope this continues in 2022.”

“Basket spend has been up, particularly among the customers who use our loyalty scheme, and I’m sure this is because they prefer to physically get their hands on what they want rather than shopping online and worrying about whether things will turn up or not,” said Brendan Will, of Aberdeen based Wills Toy Shop.

Unlike some years, there was no stand out toy or line this Christmas, with sales spread across the board and across other usual strong performers such as Lego, Sylvanian Families, Schleich, VTech, Playmobil, Barbie – and, of course, Pokémon,.

Though some retailers had experienced a few stock shortages, many had not really been affected having ordered in enough stock earlier than usual to cover demand. Nigel Kemp, of Halesworth Toy Shop in Halesworth told Toy World: “I managed to get most of the stock I wanted, despite all the problems, and I strategically topped up all my ranges in September and October. I packed the shop out with as much stock as I physically could, and I think it was a good move.”

Looking to 2022, there are still concerns around supply challenges and price increases, along with increases in the cost of living and the ongoing pandemic, but many retailers are hopeful of more normality and certainty this year.

“We begin 2022 with a positive outlook and belief that the local support we have received throughout the previous two years will continue,” said John Testori, of Bambola Toymaster in St Helier, Jersey.

To read the full article, which appears in the January issue of Toy World, click here.