Gary and his team have been forced to rethink the company’s entire business model, as John Baulch explains. 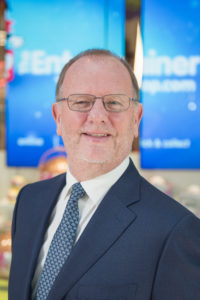 I was originally due to interview Gary Grant, on 18th March, ahead of the grand opening of the newly refurbished Birmingham Bull Ring store on 1st April. The original plan was for Gary to outline the new features of the store, which was to include the first ELC ‘store within a store’ concept, for an article which was scheduled to appear in the April issue of Toy World. In the light of the rapidly escalating pandemic situation, plans changed; by the time Gary called that evening, he suggested that now wasn’t the right time to be running an article extolling the virtues of a new store layout, and I agreed with him completely. So we just chatted for 45 minutes – all completely off the record – about the impending crisis: what we thought might happen, how it would affect not only our respective businesses, but the whole of the UK, and how we might navigate the choppy waters which lay ahead.

By the time I caught up with Gary to conduct this official on the record interview six weeks later, the whole world had changed. Much of what we had discussed during that initial conversation had come to pass: as we both thought, non-food stores had been instructed to close by the government, leaving retailers faced with a prolonged period of closure. For a retailer like The Entertainer, it was a daunting prospect, as Gary explained: “I’ve been on an emotional rollercoaster. It’s a frightening position to be in for a retailer, facing an undefined period of closure. The Entertainer is a bricks and mortar retailer which sells online: the internet supports our shops and vice versa – each channel generates sales for the other. But as a retailer which generates most of its turnover in-store and relies on delivering an experience to customers, when you close that side of the business, you’re looking at a very deep hole with no light at the end of the tunnel.”

This is an excerpt from an in-depth article published in the June issue of Toy World. To read the full, comprehensive piece in its entirety, which includes details of The Entertainer’s new Readyin10 initiative, click here.