Exclusive: What’s in a game? Toy World finds out with Exploding Kittens

Rachael Simpson-Jones sat down with Joeri Hoste, general manager international, to find out what 2022 has in store for Exploding Kittens. 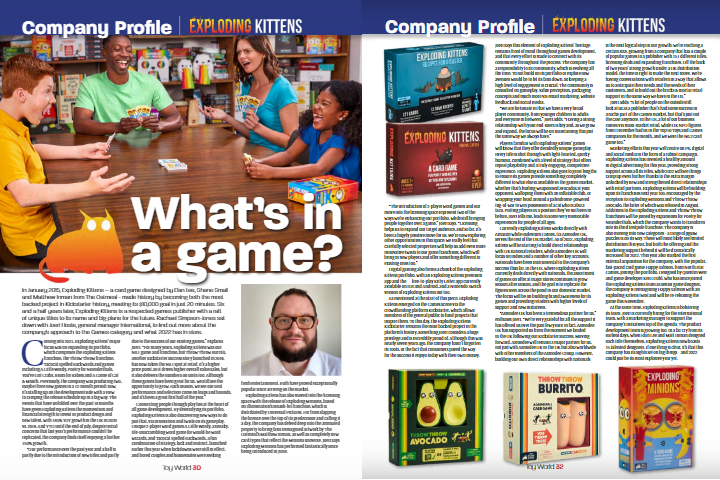 In January 2015, the Exploding Kittens game made history by becoming both the most backed project in Kickstarter history, meeting its $10,000 goal in just 20 minutes. Six and a half years later, Exploding Kittens is a respected games publisher with a raft of unique titles to its name and big plans for the future.

Coming into 2021, the main focus was on expanding the company portfolio, which comprises the Exploding Kittens franchise, the Throw Throw franchise, Tacocat Spelled Backwards and games including A Little Wordy, Poetry for Neanderthals, You’ve Got Crabs, Bears for Babies and A Game of Cat & Mouth. Previously, the company was producing two, maybe three new games in a 12-month period; now, it’s staffing up on the development side with a view to ramping the release schedule up in a big way. The events that have unfolded over the past 18 months have given Exploding Kittens the momentum and financial strength to invest in product design and new talent, with +85% YOY growth in the UK in 2020 vs. 2019. And YTD until the end of July, despite initial concerns that last year’s performance couldn’t be replicated, the company finds itself enjoying a further +50% growth.

By diversifying its portfolio, Exploding Kittens is also discovering new ways to connect people through play, via innovation and twists on its gameplay. The company is also continuing to find innovative ways to reach game-playing consumers.

“We are fortunate in that we have a very broad player community, from younger children to adults and everyone in between,” Joeri told us. “Having a strong relationship with your end-users is key and, as we grow and expand, the focus will be on maintaining this just the same way we always have.”

To find out more about how the company has enhanced its portfolio, how Exploding Kittens has moved into the licensing space and embraced digital gaming, and how the company’s ranges will be marketed and distributed going forwards, read the full article, which appears in the Toy World Games & Puzzles Supplement, by clicking here.

If one thing is clear, it’s that this company has its sights set on big things – and 2022 could just be its most explosive year yet.