Toy World brings you the latest in the Wheeled Toys category for this year, and how recent developments in transportation law could affect the sector. 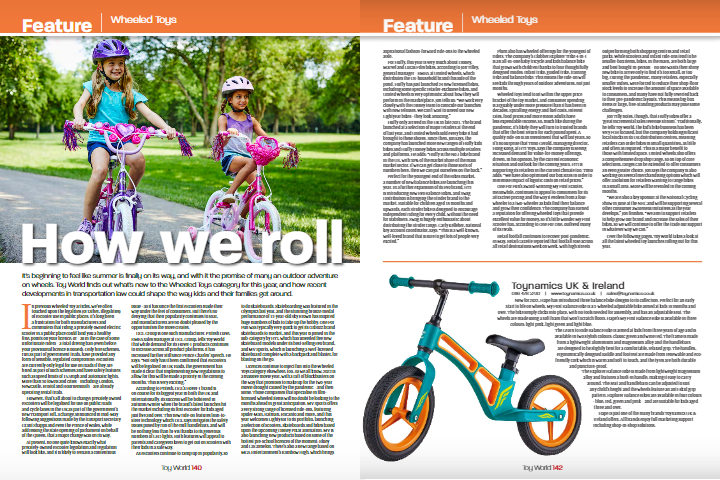 It’s beginning to feel like summer is finally on its way, and with it the promise of many an outdoor adventure on wheels. In previous Wheeled Toy articles, we’ve touched upon the legalities (or rather, illegalities) of eScooter use in public places. It’s long been a frustration for both manufacturers and commuters that riding a privately owned electric scooter in a public place could land you a healthy fine, points on your licence, or – as in the case of some unfortunate riders – a total driving ban. Only hire schemes, run as part of government trials, have provided any form of sensible, regulated compromise.

However, that’s all about to change; privately owned eScooters will be legalised for use on public roads and cycle lanes in the UK as part of the government’s new Transport Bill, a change announced in mid-May. At present, no one quite knows exactly what privately-owned eScooter legislation and regulation will look like, but there’s no denying that their popularity continues to soar, and manufacturers are no doubt pleased by the opportunities the move creates.

We talk to Pritesh Dave at DGL Group, who tells Toy World that DGL’s Hover-1 brand is on course for its biggest year in both the UK and internationally. One For Fun, HTI and MV Sports share their latest news, and there’s great anticipation for a raft of film-licensed wheeled items this summer, and indeed for licensed wheeled items all round. (Check out MV’s extensive range for starters.) Huffy has just launched 24 new licensed bikes, and Jon Tilley, general manager – EMEA at United Wheels, is very optimistic about how they will perform in the marketplace.

During the pandemic, many retailers, especially smaller indies, were forced to reduce their shop-floor stock levels to increase the amount of space available to consumers, and many have not fully reverted back to their pre-pandemic layouts. This means big-box items or large, free-standing products may pose some challenges. However, suppliers are keen to help out with merchandising and drop shipping options.

To find out more, read the full article, which appeared in the June edition of Toy World, click here.