The company has announced a new range of cuddly characters in a variety of sizes, set to join the Squishmallows line-up this July. 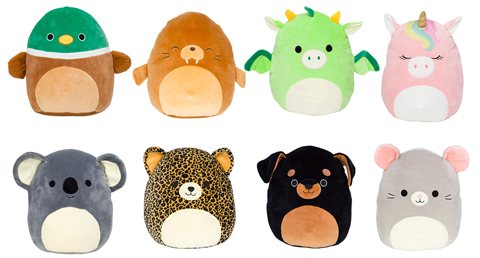 The expanded launch of Squad 3 is set to take the brand to the next level when it debuts trade-wide with a new cast available in an array of sizes. These range from 12”,16” and super-sized 20”. Four styles of the new Flip-A-Mallows will give kids the opportunity to own two toys in one as the reversible 5” plush can be flipped over to reveal a second character. The twelve previously released 7.5” characters will also be available. The personality of each Squishmallows character is detailed on its hangtag to create an emotional connection and encourage collectability.

Jazwares is supporting the Squad 3 roll out with significant TV sponsorship on Nick Jr. and Nick Jr. Too, running every evening from 17th July to 8th August. Alongside TV ad placements, the launch will be boosted by digital advertising on YouTube and VOD platforms and a sponsored kidfluencer campaign across YouTube, TikTok and Instagram. Marketing support will also be bolstered by the appointment of License to PR.

Jazwares expansion of the Squishmallows universe follows its recent acquisition of LA-based toy firm, Kellytoy, which has strengthened its position in the plush market and created new opportunities for the Squishmallows brand on a global scale.

Squishmallows Squad 3 will be available from July 2020.