With the 2021/22 Premier League underway, Lego Duplo has kicked off its own football play, with the help of footballing greats Jamie Vardy and Casey Stoney. 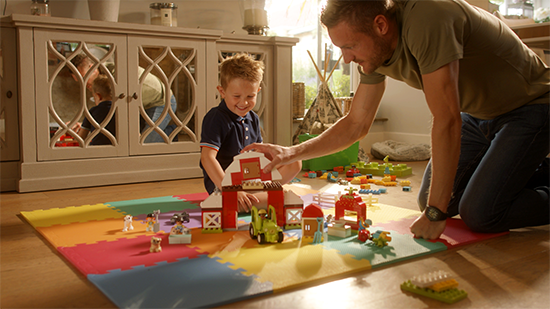 Jamie Vardy and his son, Finley

Lego Duplo has partnered with football greats Jamie Vardy and Casey Stoney to help parents celebrate their toddlers’ milestones, from kicking a ball to playing with bricks, with a little help from child psychologist Sam Wass.

In hilarious video footage released on the Lego YouTube channel, Leicester City striker Jamie Vardy, complete with dinosaur ears, and former Team GB captain Casey Stoney, can be seen high-fiving, bunny hopping and tickling their little ones as they encourage parents to celebrate their own kids milestones to the max.

The footballers, dubbed Lego Duplo ’s resident ‘Experts in Celebration’ for their experience celebrating their footballing achievements both on the pitch and from the sidelines, have been applauded by the toy company for mirroring their kids’ behaviour and getting the tone right during play, small steps parents can take to make a big difference to their child’s development. The video features Jamie challenging his son Finley to a kickabout before celebrating a goal by showing off his corner flag air guitar moves, while Casey congratulates her daughter Willow’s great work by tapping into her experience as a football team captain.

Jamie Vardy, Leicester City striker and dad, said: “I’ve definitely been known to get creative when it comes to goal celebrations, and the same goes when celebrating milestone moments at home with the kids. Learning at home during lockdown was challenging for children and lots of them found it frustrating, but as a parent I know that encouraging and supporting even the smallest achievements goes a really long way to making them feel happy and confident.” 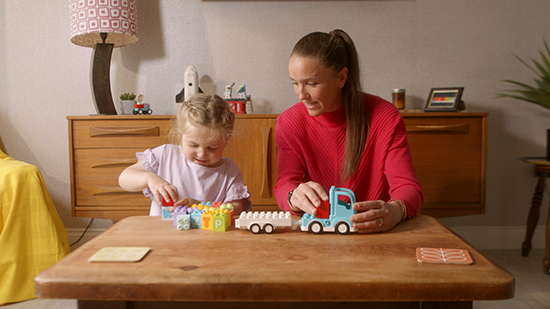 Casey Stoney and her daughter, Willow

Casey Stoney, former Team GB captain and mum of three, says: “The biggest job as a football manager is to support and encourage your team, and there’s no better way to do this than by celebrating with them. By cheering them on from the side lines and lifting their energy at half time, I boost team morale and help my players’ development. I use the same tactics as a mum. I’m my kids’ biggest supporter and celebrating moments with them helps nurture their development and growth. With mum cheering her on, Willow knows she can tackle anything she puts her mind to.”

Child psychologist Sam Wass, of The Secret Life of 4 and 5 Year Olds, shares his knowledge on the importance of championing these moments, for parents and toddlers, with his top tips for Celebrating like a Pro. First steps and first words are important milestones that have parents jumping with joy, but Wass reminds us that cheering toddlers on for the everyday wins, like kicking a ball or building a brick creation, can help supercharge their capacity to further learn and develop, and make mum and dad feel great in the process.