Launching in August, the Packs let Super Mario fans level up their gameplay even further. 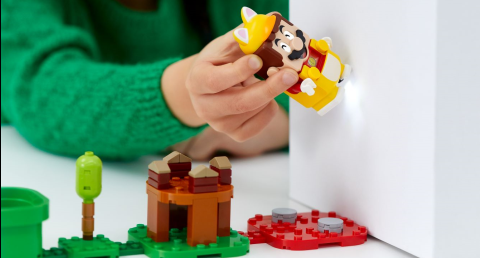 The Lego Group has unveiled the latest additions to its new Super Mario range. Several Super Mario Power-Up Packs will join the existing line-up, which launched in April and features the Adventures with Mario Starter Course set. This can be combined with the Lego Super Mario Expansion Sets, which include the Piranha Plant Power Slide Expansion Set and the Bowser’s Castle Boss Battle Expansion Set.

The Cat Mario Power-Up Pack gives Mario cat-like skills such as the ability to walk up vertical obstacles and collect coins. Finally, with the Builder Mario Power-Up Pack, players can earn digital coins by making the famous Italian plumber stomp hard on Lego bricks in the course they have created. The more he stomps, the more coins they win.

To play with the suits, fans will need the Lego Mario figure included in the Adventures with Mario Starter Course. No batteries are needed for the Power-Up Packs – just dress Lego Mario in the suits to power up.