Ryan’s World has partnered with the Marvin’s Magic to create a unique magic set that is full of secrets and surprises. 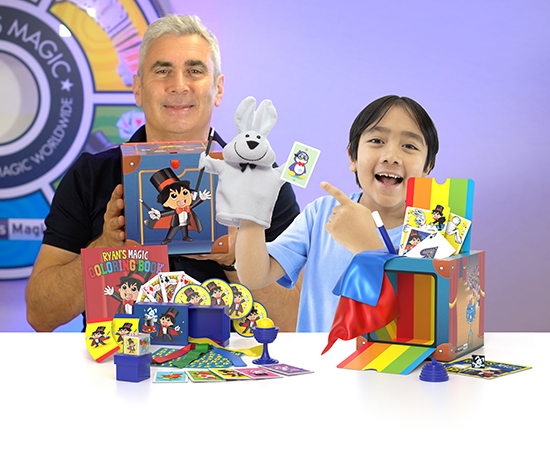 Ryan’s Magic Box is available to Ryan’s loyal fanbase via a brand-new subscription service that can be joined on Ryan’s website.

Creator of Marvin’s Magic, Marvin Berglas said: “Ryan has a global appeal and embodies the very principles we have promoted over the past 35 years here at Marvin’s Magic.”

Ryan’s YouTube Channel, which currently has 30.6m subscribers, features Ryan asking Marvin to give him some magic tips to help him perform his show. This episode has gained much interest during launch week, reaching more than 780k views, and climbing.

Young performers will learn magic with Ryan and Marvin as they are given exclusive access to top secret video instructions.

Included are a host of Ryan themed magic tricks such as colouring books with black and white drawings that appear to be instantly coloured in, a magic bunny puppet that will assist young magicians in their performance, a magic puzzling jigsaw, colour changing silk handkerchiefs, a glow in the dark magic wand and much more.

Even the box itself is a magic trick – the audience sees it is completely empty, however with a snap of the fingers or a tap of the wand, magical items will appear inside. All tricks are designed for young hands, so it really is ‘Magic Made Easy’.

Marvin went on to say: “Ryan inspires confidence, creativity, inventiveness, and exploration in his legions of young followers, and we promote the very same here at Marvin’s Magic. Magic is a great hobby that encourages social skills, builds confidence and ignites imagination whilst helping to develop communication. We are thrilled to be able to promote these life lessons to Ryan’s millions of fans worldwide”