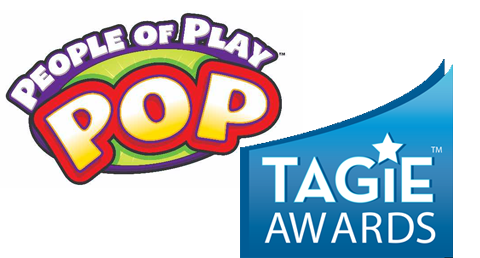 Now entering its 15th year, the TAGIE Awards, presented by People of Play (POP), will once again honour the best and brightest innovators, designers, retailers, suppliers and marketers in the toy and game industry. Each year, the TAGIEs bring together the many communities that make up the larger industry of play, including professionals and fans from all over the world.

The TAGIEs are part of POP Week. Last year over 30,000 people from 115 countries participated in POP Week and much of the POP Week content continues to live online.

In 2021 the TAGIE Committee introduced two new categories: the Most Innovative Licensed Product and Game Changers. This year,the global toy industry is invited to suggest colleagues for a Lifetime Achievement award. John Barbour, a respected captain of the toy industry and Chair of the Lifetime Achievement Committee, has taken the nominations to a new level, which is detailed in the nomination form.

Nominations for all awards can be submitted here.

The TAGIE Awards go beyond the basics to celebrate the broad and unique mix of talents that define the bold and innovative individuals and teams of the toy and game industry; the People of Play.

Eleven categories are now open for nominations for the 2022 TAGIE Awards, and include:

Nominations are open now and can be submitted until August 15th. Finalists from each category will be announced at the beginning of September. Voting will be open to the general public, media and industry beginning in mid-September.